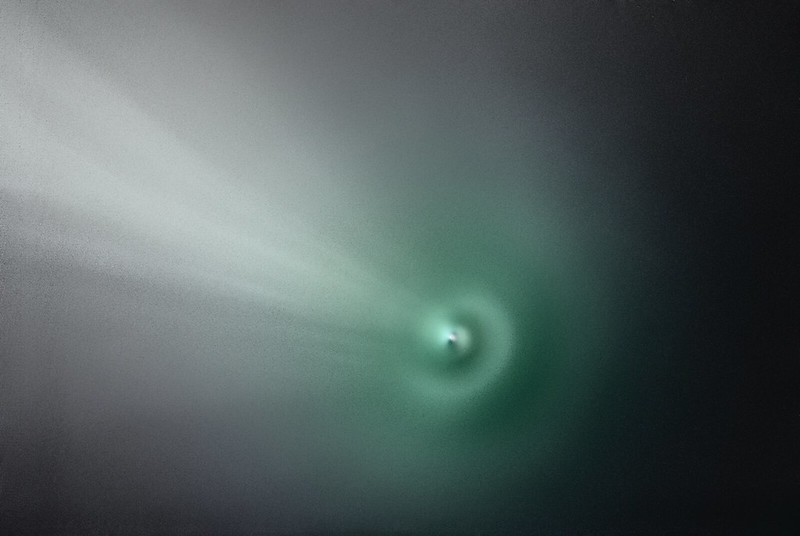 2020 Aug 03: Phil Plait wrote a bit about this in his newsletter: badastronomy.substack.com/p/ban-241-climate-irony-goodbye...

Data originally collected by William C. Keel on 2020 July 24 using the Jacobus Kapteyn 1m telescope with SARA. He'd already done the work of flat fielding and stacking the exposures in r, v, and b bands, and asked if I'd like to take a shot at processing it further.

At first I was interested in the faint striations already visible in the tail, but later I discovered a kind of spiral emanating from the coma. Initial attempts weren't pretty, and had a lot of introduced artifacts. At some point I realized I could use the same kind of subtraction model I've used in the past for elliptical galaxies to take away excess light in a uniform pattern, which brings out structures that do not match that uniform pattern.

The spiral pattern was most apparent in the b band, mostly visible in the v band, but almost completely gone in the r band. Because of this, I went ahead and used color data from the normal, non-subtracted RVB image, and luminosity from just the model-subtracted b band.

I did use some rather heavy noise reduction in the darker parts of the image, but noise reduction was not necessary for the brighter parts. I tried to make the noise appear uniform. Some small columns of missing data created by a dead or hot pixel were cloned out to the lower right within the coma.

Future reference for self: The curve you need to start with for comets is 1/x (with many thanks to Bill for figuring this out for me)