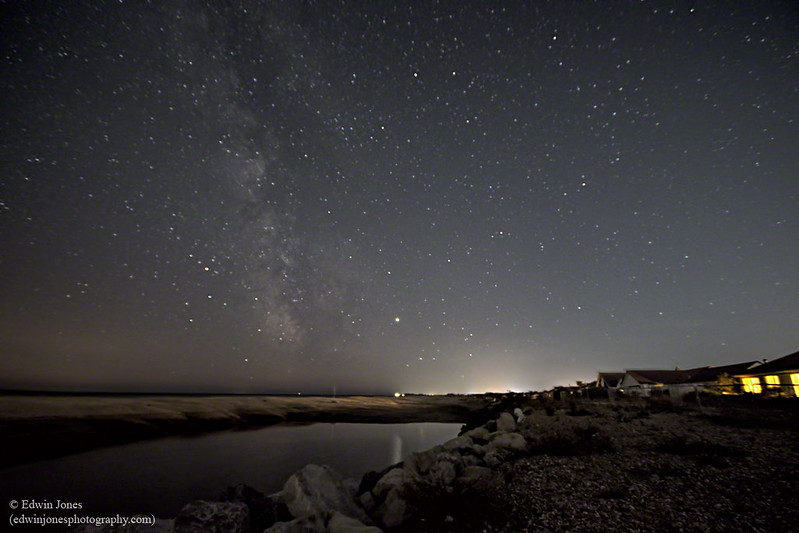 This was taken Friday evening with a 10mm wide angle lens. Taken about a mile from home next to the beach and a small lagoon on the beach at Pagham. This part of the South Coast of England is far from ideal for taking the Milky Way. Pagham Harbour is a nature reserve a mile from home and a small gap in the coastal sprawl of light pollution. Light glow from Bognor Regis is just a few miles to the east behind me while to the West and straight ahead in the picture is the town of Selsey on the far side of the harbour The Milky Way is the brightest central part of our Galaxy. The best parts can only be seen in the summer because the sun is in that area in the winter. The best times are April through to September. The bright star bottom centre reflected in the Lagoon is the Planet Jupiter.

I checked on suitable settings for the image. I used my widest aperture of f4, 30 seconds and ISO of 1600. The moon had set earlier at 20.22 and this was about 9.40 making for a dark sky. The foreground was lit by surrounding skyglow from light pollution. For this shot I used a stack of 10 shots combined in a free program called Sequator. With a normal stacking program the movement of the stars from the earth rotatating would create star trails. With this one the stacking is based on the stars keeping them stationary and automatically using one image for the foreground. I used a remote trigger device. .I used a Sony A68 with a Sigma 10-20mm lens at 10m. Taken with a Tripod looking SW towards the Harbour Mouth

A lot of steps were taken in the processing to bring out the milky way starting with Raw adjustments. This was followed by Topaz DeNoise which removed quite a large amount of Noise. Then Topaz Clarity to bring up more detail. I used various Brightness contrast adjustment layers with masks to brighten and darken various parts of the image including brightening the Milky Way and foreground.