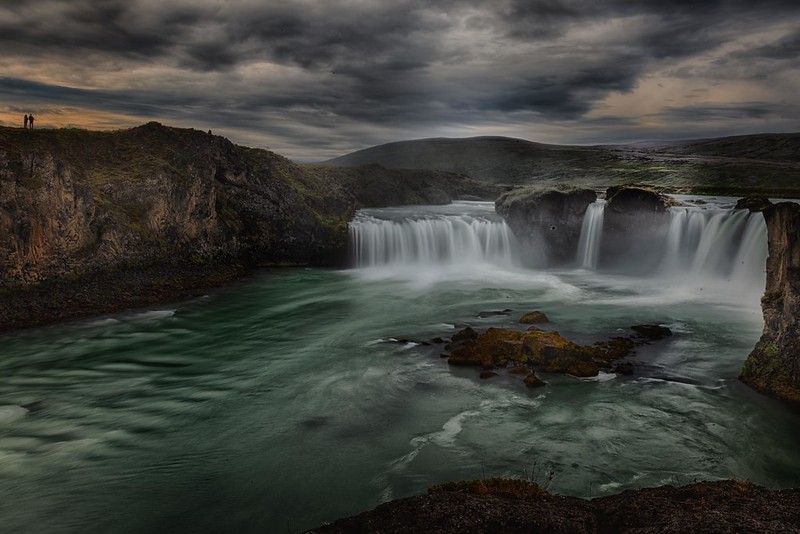 Goðafoss is a waterfall in northern Iceland. It is located along the country's main ring road at the junction with the Sprengisandur highland road. The water of the river Skjálfandafljót falls from a height of 12 metres over a width of 30 metres. The river rises in the Icelandic highlands and runs through the Bárðardalur valley.
Aerial panorama of Goðafoss

The origin of the waterfall's name is not completely clear. In modern Icelandic, the name can be read either as "waterfall of the goð (pagan idols)" or "waterfall of the goði (chieftain)." Linguist and placename expert Svavar Sigmundsson suggests that the name derives from two crags at the falls which resemble pagan idols. In 1879-1882, a myth was published in Denmark according to which the waterfall was named when the lawspeaker Þorgeir Ljósvetningagoði made Christianity the official religion of Iceland in the year 999 or 1000. Upon returning home from the Alþingi, Þorgeir supposedly threw his statues of the Norse gods into the waterfall. However, although the story of Þorgeir's role in the adoption of Christianity in Iceland is preserved in Ari Þorgilsson's Íslendingabók, no mention is made of Þorgeir throwing his idols into Goðafoss. The legend appears to be a nineteenth-century fabrication.
Text adapted from Wikipedia.