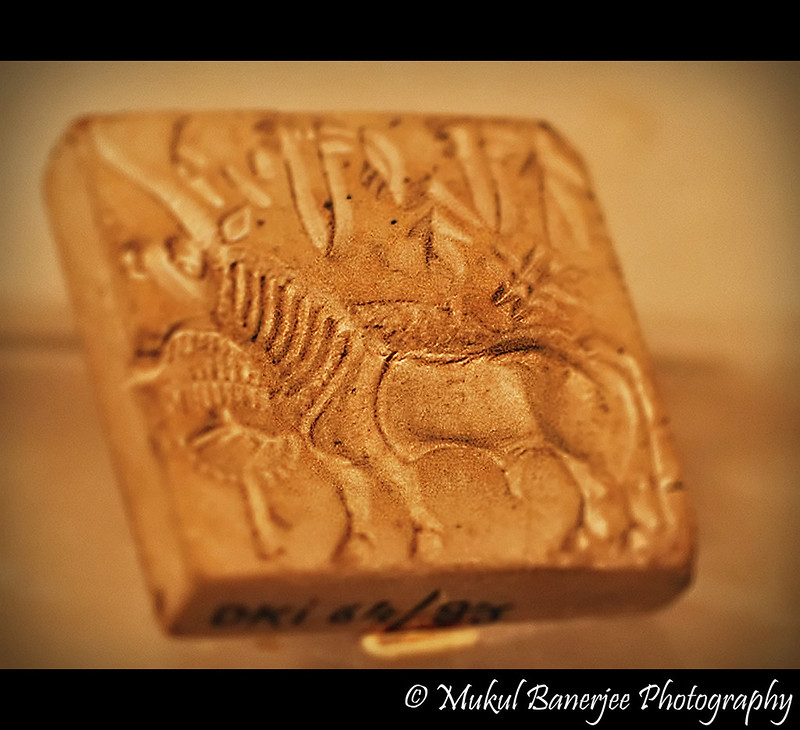 Seals appear in the Indus Valley around 2600 B.C. with the rise of the cities and associated administrators. Square and rectangular seals were made from fired steatite. The soft soapstone was carved, polished, and then fired in a kiln to whiten and harden the surface. Seals made of metal are extremely rare, but copper and silver examples are known. The square seals usually have a line of script along the top and a carved animal in the central portion. The animals depicted on the seals, usually males, include domestic and wild animals as well as mythical creatures, such as the unicorn. A small feeding trough or mysterious offering stand is often placed below the head of the animal. Some seals contain more complex scenes that represent mythological or religious events. On the reverse side is a carved knob, or boss, with a perforation for holding a thick cord. These knobs must have been easily broken and are missing from most seals. The unicorn is by far the most common motif found impressed on clay tags originally attached to knots or binding on a bundle of goods. This suggests that the unicorn seal owners were mostly involved in trade and commerce but does not mean that they were the most powerful group. The less widely distributed seals with the bull, elephant, rhinoceros, and tiger motifs may have represented the most powerful clans or offices that actually ruled the cities. Other types of seals found in the Indus Valley, such as compartmented seals, reflect connections with regions where these types of seal were in use.