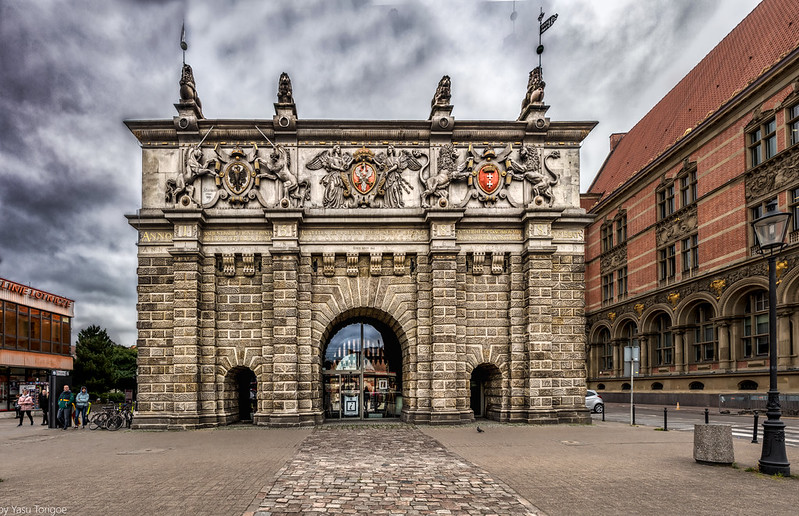 The Wyżynna Gate, formerly also the "High Gate" - a Renaissance city gate in Gdańsk, now at the main road route ( Okopowa and Wały Jagiellońskie streets ). Until 1895 it was within sixteenth-century fortifications, between the Bastion of St. Elizabeth and the Karowy Bastion, and was the main gate to the city, opening the string of so-called Dear King .
The construction project was approved in 1586 and completed in 1588; for 290 years the gate existed unchanged. In 1861 the facade was subjected to restoration works (their trace is the date placed in several places). In 1878, it was decided to increase the passage capacity - the internal gate was demolished, and additional passages were punched in the embankments on both sides of the van den Blocke gate. In addition, the drawbridge over the moat was replaced by a permanent dyke. In 1884, the whole gate was faced with rusty (which previously existed only on the west facade ) and a frieze with the coat of arms on the eastern facade was added. In 1895, the embankments were completely lifted and the moat was filled up. For free-standing building in 1903, transferred to the gate guardhouse and therefore closed rides. Afterdemilitarization of Gdansk in 1920, the room after the guard was taken by the travel agency Norddeutscher Lloyd . In 1945, mainly the gate's sculptural decoration was damaged. Repairs and maintenance were carried out in 1946, 1949/50 and 1964/65. It was not until 1966 that the missing figure of the lion in the crown was reconstructed. The rooms were used by the "Orbis" Polish Travel Agency. In 1952, the passage was reopened, leaving closed side passages, which housed, among others tourist information. In 2002, the gate was taken over by the Historical Museum of the City of Gdańsk, and on May 22, 2012 , the Pomeranian Tourist Information Center was opened.
Loading comments...
This photo was taken in: Poland > Pomerania > Gdańsk
Loading contexts...
show more
JFIF
IFD0
ExifIFD
GPS
Popularity
Dates