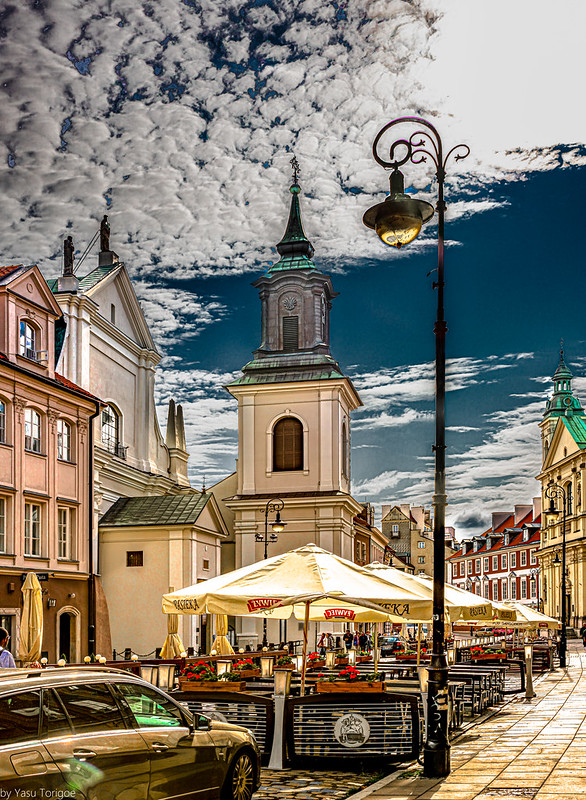 St. Hyacinth's Church was founded by the Dominican Order and adjoins Warsaw's largest monastery. The church is a mixture of Renaissance and early-Baroque styles. Its construction began in 1603 and it was completed in 1639.

During the construction and shortly afterwards the church was encompassed with ornate chapels. In 1627 Jadwiga Mińska established the Holy Cross Chapel, the so-called Dark Chapel, and in 1651 the Royal Musicians founded the Chapel of Our Lady of the Snows.

When Warsaw was captured by Swedish and Brandenburgian forces in 1655, the church shared the same fate as other buildings in the city. it was ransacked and burned.[1] After the war it was rebuilt and consecrated in 1661 by bishop Wojciech Tolibowski, the bishop of Poznań. In 1662 the bell tower was erected, adjacent to the church, and in 1690 the Wyszogród pantler Adam Kotowski established the most important church feature - the St. Dominic Chapel. The ornate baroque building was constructed according to the design by prominent Warsaw architect Tylman Gamerski.

The 18th century was the age of the church's greatest prosperity. The monastery's library possessed the richest collection of volumes in Poland. Unfortunately it was later completely destroyed.

During World War II, the church and monastery served the Polish forces in the Warsaw Uprising as a field hospital.[1] This fact turned these buildings into targets of frequent bombings by the Germans.[1] During the bombardments over a thousand civilians and insurgents were killed. (Wikipedia)