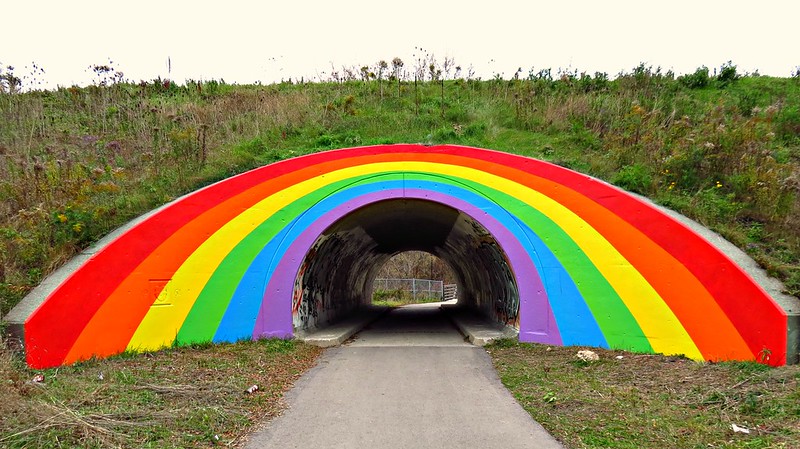 Excerpt from the Toronto Star on Saturday, November 3, 2012:
The first time the rainbow mysteriously appeared on a tunnel visible from the Don Valley Parkway, the North York parks department painted over it.

But the guerrilla mural artist — known as “the Caretaker of Dreams” — persevered, eventually winning them over.

Now, 40 years later, the city has officially restored the psychedelic mural that has brought smiles to countless grim commutes — just as the artist intended.

The origins of the mural have become local legend featuring dawn run-ins with police officers and a terrible fall.

There is also a cat involved.

The idea sparked in 1972 when 16-year-old B.C. (Berg) Johnson arrived from Norway and noticed something depressing. “People in Toronto never looked up. They looked down. They never smiled too much.”

The “Caretaker of Dreams,” as he’d come to write on his business cards, decided a “rainbow project” would be just the thing to cheer up dour Torontonians.

So he fashioned a swing from some rope, attached it to the tracks of the abandoned CPR rail line that runs above the small tunnel, and lowered himself over the side to paint.

Except the railway line wasn’t abandoned.

A train whizzed by, slicing the rope, and Johnson tumbled down the embankment breaking his leg. But a class from Don Mills Middle School stepped in to help him finish it, creating a symbol of hope and love that has enchanted children and adults for decades, and even inspired a famous painting by Scottish artist Peter Doig.

However, the parks department at the time failed to be charmed, painting over it in grey.
Undaunted, Johnson returned to restore the rainbow (with a ladder) at least 40 times until his fourth arrest, in 1994, when a judge issued a no-trespassing order. The police did let him finish painting before arresting him, he told the Star in 1995 after his identity was uncovered by a curious city recreation co-ordinator.

But other community members took up the cause, including Rainbow Hunter, a group of about 250 people dedicated to helping needy animals, who maintained the mural as a memorial to the cat their group was named for.

In the seventies, Johnson also spread his vigilante rainbows through the GTA. Only the DVP rainbow remains, nestled east of the highway and south of Lawrence Ave. in Milne Hollow Park.
Its deterioration in recent years inspired the city to restore the landmark, along with building the East Don Trail. The $20,000 two-phase project will turn the entire tunnel into public art with the help of youth from the Flemingdon Park area.

Phase one — restoring the rainbow — started Oct. 9 and took Rob Matejka and Anthony DeLacruz six days to complete. Matejka is the education programmer at Mural Routes, a non-profit dedicated to creating and restoring wall art in the city. DeLacruz is a graduate of its summer artist training programs.

As they started scraping the paint off, passersby would rush up, concerned they were taking away the rainbow.

“We did a lot of reassuring,” said Matejka. For people who grew up in the area, “it always seemed like a magical place to them, a tunnel to a special place.”

Johnson, he thinks, would be proud.