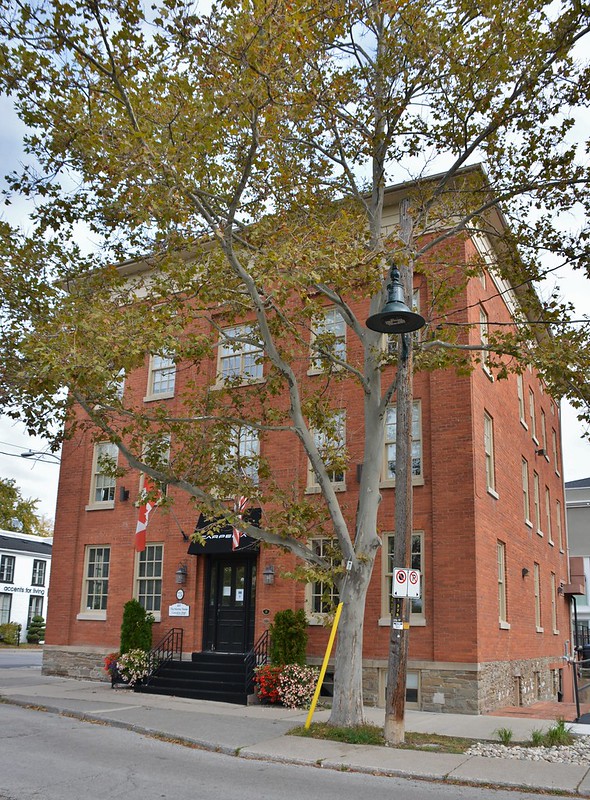 It was opened for business on December 15th, 1857. The hotel was originally named the “Canadian Hotel”, and offered its patrons twenty-one bedrooms (but small, many only six feet by six feet) and four parlours. For the security of his customers’ valuables John Williams provided hidden cupboards in the cellar stairways.

John Williams sold the hotel to James Teetor in 1867 (for $2,005) and returned to operating the “Oakville House”, the inn at Navy and Colborne, which he had previously owned. He had also been the proprietor of the “Railway Station Hotel” which he built in 1856.

In 1896 the “Canadian Hotel” returned to Williams’ family, being purchased by Murray Williams, John’s nephew. It was Murray who changed the name to the “Murray House Hotel”, the name it still carries.

Murray Williams brought the hotel back to the standards set by Uncle John, for the establishment had gone downhill under a dozen proprietors since James Teetor.

Standing in lawns, with a fountain playing water in the centre, it was generously supplied by waggon sheds for its customers. But it was Murry Williams who introduced the automobile to Oakville, to begin the demise of the waggon.