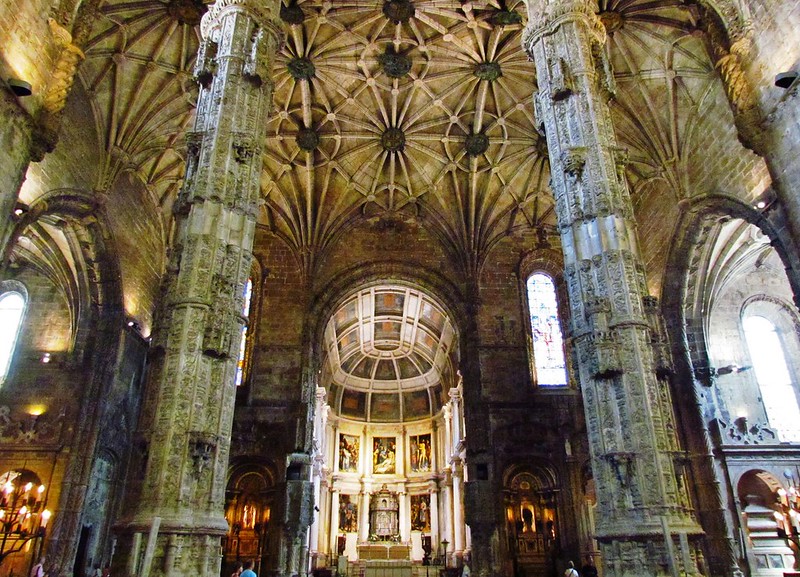 Diogo Boitac laid the foundations for this three-aisled church (Church of Santa Maria) with five bays under a single vault, a clearly marked but only slightly projecting transept and a raised choir. The hall church layout is composed of aisles and nave that are of equal height. Boitac built the walls of the church as far as the cornices and then started with the construction of the adjoining monastery.

Juan de Castilho, a Spanish architect and sculptor, continued the construction in 1517. He completed the retaining walls and the unique single-span ribbed vault, a combination of stellar vaulting and tracery vaults spanning the 19-metre-wide church.[11] Each set of ribs in the vaulting is secured by bosses. The bold design (1522) of the transversal vault of the transept lacks any piers or columns, while Boitac had originally planned three bays in the transept. The transept's unsupported vault gives the visitor the impression that it floats in the air.

Castilho also decorated the six 25-metre high, slender, articulated, octagonal columns with refined grotesque or floral elements typical of the Renaissance style. The construction of this late-Gothic hall is aesthetically and architecturally a masterwork: it augments the spatial effect of this vast building. The northern column closest to the transept there is a medallion that may have been intentionally included as a portrait of Boitac or Juan de Castilho.

At the end of the side aisles and on both sides of the choir are altars (also in the Manueline style) dating from the 16th and the 17th centuries. They are decorated with carved wood and plated in golden and green pigment, and one of them supports the image of Saint Jerome in multi-coloured enamelled terracotta.

This chancel was ordered by Queen Catherine of Austria as the final resting place for the royal family. It is the work of Jerónimo de Ruão (Jean de Rouen) in the Classical style. The royal tombs rest on marble elephants and are set between Ionic pillars, topped by Corinthian pillars. The tombs on the left side of the choir belong to king Manuel I and his wife Maria of Aragon, while the tombs on the right side belong to King João III and his wife Queen Catherine of Austria.