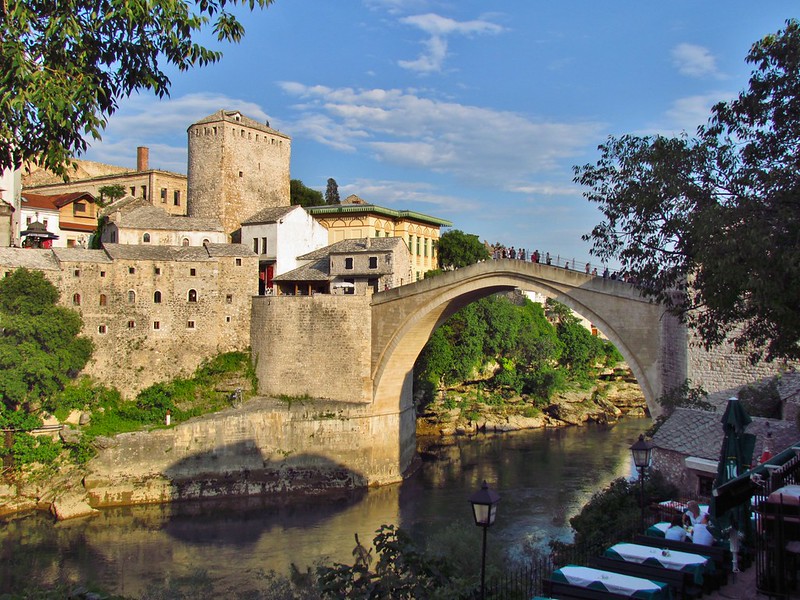 Stari Most (literally 'Old Bridge'), also known as Mostar Bridge, is a rebuilt 16th-century Ottoman bridge in the city of Mostar in Bosnia and Herzegovina that crosses the river Neretva and connects the two parts of the city. The Old Bridge stood for 427 years, until it was destroyed on 9 November 1993 by Croat paramilitary forces during the Croat–Bosniak War. Subsequently, a project was set in motion to reconstruct it; the rebuilt bridge opened on 23 July 2004.

The bridge is considered an exemplary piece of Balkan Islamic architecture and was commissioned by Suleiman the Magnificent in 1557. It was designed by Mimar Hayruddin, a student and apprentice of architect Mimar Sinan who built many of the Sultan's key buildings in Istanbul and around the empire.

The bridge spans the Neretva river in the old town of Mostar, the city to which it gave the name. The city is the fifth-largest in the country; it is the center of the Herzegovina-Neretva Canton of the Federation of Bosnia and Herzegovina, and the unofficial capital of Herzegovina. The Stari Most is hump-backed, 4 metres (13 ft 1 in) wide and 30 metres (98 ft 5 in) long, and dominates the river from a height of 24 m (78 ft 9 in). Two fortified towers protect it: the Halebija tower on the northeast and the Tara tower on the southwest, called "the bridge keepers" (natively mostari).