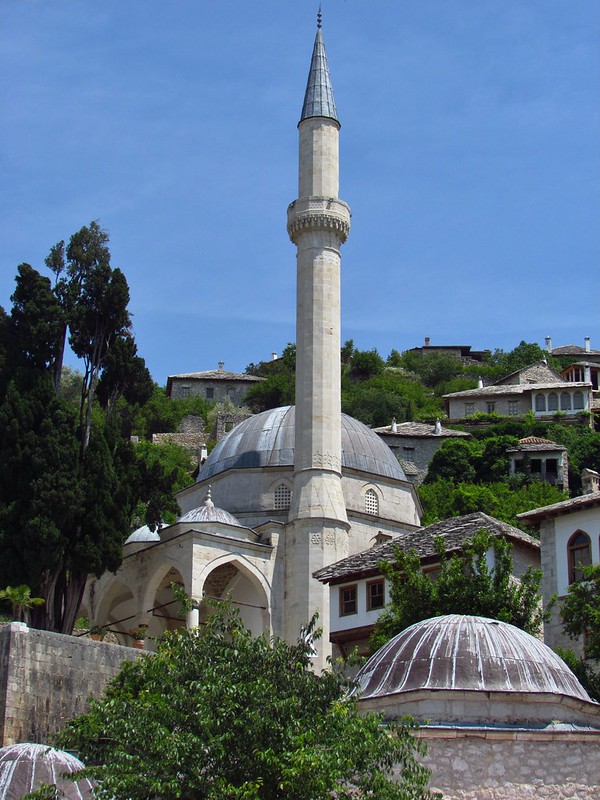 Počitelj is historic village and an open-air museum in Bosnia and Herzegovina. It is located in the municipality of Čapljina, in the Herzegovina-Neretva Canton of the Federation of Bosnia and Herzegovina. The historic village is situated on the left bank of the river Neretva, on the main road Mostar-Metković, and it is about 30 kilometres (19 mi) to the south of Mostar and about 3 kilometres (1.9 mi) from center of Čapljina.

The village is built in a natural karst amphitheater along the Neretva river during the Middle Ages. The earliest mention of or recorded reference to Počitelj is in charters of king Alfonso V and Fridrich III from 1444 to 1448. However, the village most likely predate these documents. The exact date can't be pinpointed but it is likely that fortified town along with its complementary settlements was built by Bosnian king Tvrtko I sometime in 1383. Počitelj was considered the administrative center and center of governance of Župa Dubrava (county), while its westernmost point gave it major strategic importance. During the years following Ottoman conquest of Bosnian realm, between 1464 and 1471, the town was fortified by Vladislav Herzegović with a support of Dubrovnik, king Matthias Corvinus of Hungary and the Pope. From this point the walled town of Počitelj evolved in the period from the 16th to the 18th centuries. Architecturally, the stone-constructed parts of the town are a fortified complex, in which two stages of evolution are evident: medieval, and Ottoman.

In the period between 1463–1471 the town housed a Hungarian garrison and was fortified into a strategic defence stronghold. In 1471, following a brief siege, the town was conquered by the Ottomans. It lost its strategic significance. It remained within the Ottoman Empire until 1878. From 1782 to 1879 Počitelj was the seat of akadiluk (area under the jurisdiction of a qadi, or judge) and the center of the Počitelj military district from 1713 to 1835.

The significance and the town's appearance has altered during the course of its history. As far as the development of Počitelj goes, three significant periods can be distinguished:
1.The period of the Hungarian King Matthias Corvinus during which the town had a major strategic importance (1463–1471)
2.The period of the settlement development under the Ottoman Empire with the erection of public buildings: mosques, imaret, maktab, madrasa, hamam, han and the clock-tower (1471–1698).
3.The period after the Venetians conquered and destroyed Gabela (1698–1878), the main Ottoman fortification facing Dalmatia, and recovery of Počitelj's strategic importance.

After the establishment of Austro-Hungarian rule in Bosnia and Herzegovina in 1878, Počitelj lost its strategic importance and started deteriorating rapidly. The population declined gradually. The loss of the town's strategic role assisted in the preservation of the original urban architectural ensemble, so that the town remained in its original form to present day.

The entire historic urban site of Počitelj and surrounding area suffered extensive collateral damage during the 1992–1995 war in Bosnia and Herzegovina. Namely, it was heavily damaged by Croatian forces during the 1993 Bosnian War.

Following the bombing, Počitelj's sixteenth-century master works of Islamic art and architecture were destroyed and a large part of the town's population was displaced.

As proposed by the University of York, United Kingdom, and the University of Sarajevo, Počitelj was in 1996 named by the World Monuments Watch as one of the world's 100 most endangered cultural heritage sites. In the year 2000 the Federation of Bosnia and Herzegovina Government initiated the Programme of the permanent protection of Počitelj. The programme includes the protection of cultural heritage from deterioration, restoration of damaged and destroyed buildings, encouraging the return of the refugees and displaced persons to their homes and the long-term protection and revitalization of the Počitelj's historic urban area.

Historic sites
•The Gavrakanpetanović house: built at the end of the 16th century, it was named after and housed the captains of Počitelj, who belonged to the Gavrakanpetanovič family. It is typical example of the residential architecture of the village. It is the only house in town to have separate rooms for men and women. The house became the residence of an artists' colony between 1961 and 1975, one of which was the Italian painter Vittorio Miele. This was the longest operating artist colony in Southeast Europe. During the Bosnian war, the house was set on fire. It was restored in its original state in 2003.
•The Šišman Ibrahim-pašina džamija or Hajji Alija mosque: built in 1563 by Hajji-Alija, son of Musa. It was repaired in the 17th century by Šišman Ibrahim pasha. The locals gave the mosque afterwards his name. The domed mosque is notable for its special acoustics. The mosque was restored in the 1970s, but badly damaged during the Bosnian War in 1993. It was restored again in 2002.
•The Kula, a silo-shaped fort overlooking the village from the top of the hill. It used to house watchmen and military as a guard against possible intrusions from the Neretva valley.
•The Sahat Kula, a bell tower located closer to the river and at the south side of the old town.