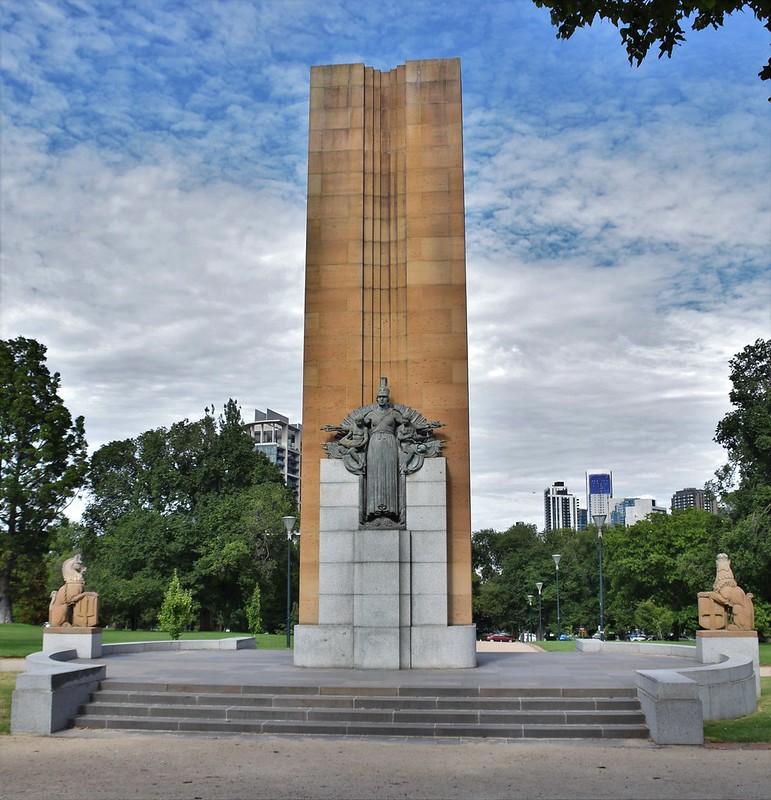 The general committee of the memorial fund today (August 4, 1937) approved of the design by Mr. W. L. Bowles, the Melbourne sculptor, for the memorial to King George the Fifth, which is to be erected in The King's Domain at a cost of about £14,000. The memorial will take the form of a tall shaft of sandstone about 36 feet high, and the figure of the King, nine feet high, dressed in his robes of the Order of the Garter, will be placed on the western facade and on the shaft, and on the eastern facade will appear a figure of Britannia holding in her arms two children, representing the Dominions and the Colonies.

Victoria's £17,000 memorial to the late King George V was unveiled today July 20, 1952). 15 years after it was begun and 16 years since the death of King George V. The Governor (Sir Dallas Brooks) with Lady Brooks, unveiled the memorial at a short military ceremony in the King's Domain attended by about 2,500. The memorial is a 55 ft. granite and sandstone column, mounted in the centre of a 30ft. square concrete base. It holds a 12ft. 2½ ton bronze statue of King George V dressed in full Garter robes and wearing the Imperial crown.

Kings Domain is an area of parklands in Melbourne, Victoria, Australia. It surrounds Government House Reserve, the home of the Governors of Victoria, the Sidney Myer Music Bowl, and the Shrine Reserve incorporating the Shrine of Remembrance.

The park was established in 1854, extending the Domain Parklands further north-west, it covers an area of 36 hectares of lawns and pathways set among non-native and native Australian mature trees, a mixture of deciduous and evergreens. In the 19th century the Kings Domain was managed by the Director of the Botanic Gardens, so many of the trees were planted by Baron Ferdinand von Mueller and later by William Guilfoyle. Around the Domain are scattered memorial statues and sculptures, each with their own story.

Kings Domain is part of a larger group of parklands directly south-east of the city, between St. Kilda Road and the Yarra River known as the Domain Parklands, which includes: