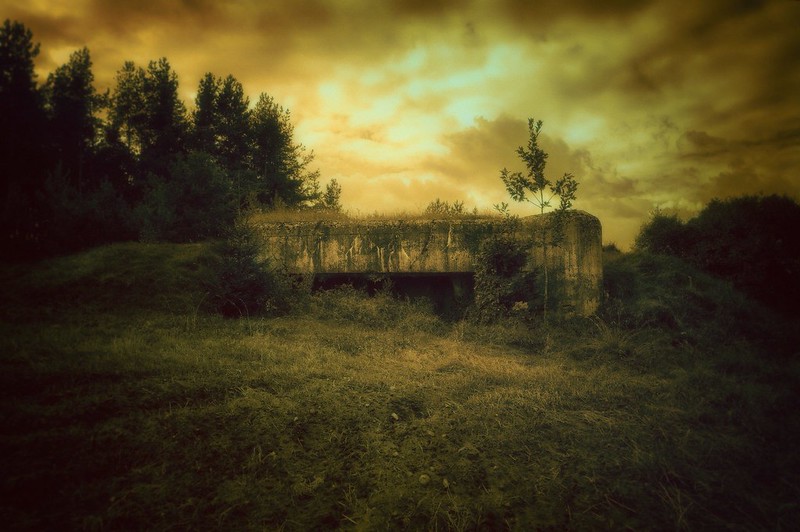 This antitank pillbox, designed for two machine guns and a 45mm antitank gun, is a bit of an oddity. It is connected by an underground passage with two other pillboxes and forms a small group clustered close together in the forest. It's the only ony visible enough for taking a photo since it's just on the edge of that forest.
There are several such groups in the area and the question is: why build them this way? There are thousands of pillboxes on the Molotov Line, yet there are only a dozen which were connected underground. They were usually built in pairs and only one had an entry, the other being accessible only through the passage from the first one. After years of research the answer WHY is still eluding us. Thre area in which they were built is no different (in terms of terrain) that any other so why bother? On the other hand, there are places where it would make sense to construct such clusters of connected pillboxes but again, they did not bother to do it.
Soviets had always been masters of improvisation and made good engineers and builders (in a truly positive sense) but sometimes we tend to overestimate their wisdom. The explanation might be simple and, to some extent, laughable. Somebody made a plan, sooner or later it had to be implemented somewhere. They happened to have enough building material so they did it right there. There were many cases when what was effectively built was seriously drifting away from what was initially made on the drawing board. Plans were changed, factories producing various parts of equipment were not informed on time and the builders, always in a mad rush to catch up with the schedule, were ending up with a pile of stuff which was not quite compatible with the original design. And so they had to change things on the fly – all these stories are described in surviving (very few) memoirs of those who had been building these vast fortifications. In some way, they are fun to read...
Therefore it is not excluded that somebody all of a sudden remembered that there was a design a bit different than the common ones, parts of the underground passage were ordered (sort of concrete Lego bricks, nothing fancy), then promptly brought by train (or could've been even made locally) and voila, here it is!
Or, the chief engineer responsible for this particular part of the line, just liked the idea of undergound passages:)
Once you learn to think the Soviet way, things sometimes become just a little bit more obvious...