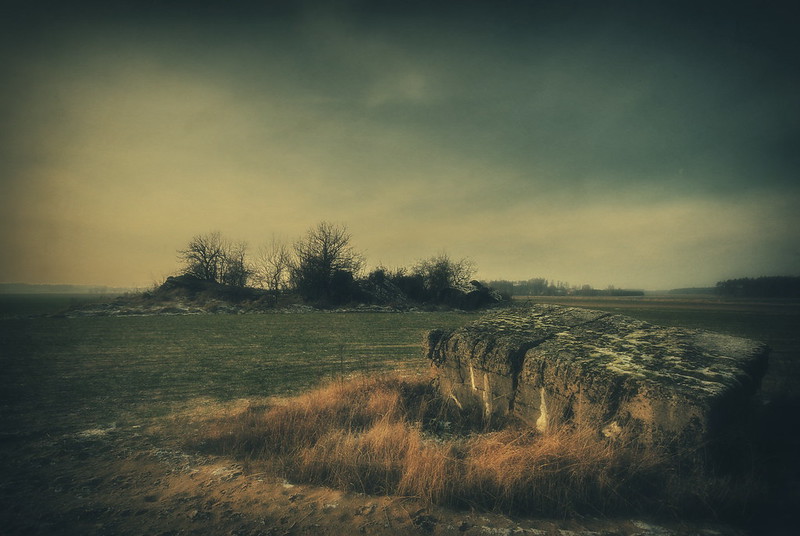 Uśnik strongpoint, located 13 kilometers from the 1941 German-Soviet border, was one of the eight strongpoints screening the vital road and railroad hub in the city of Łomża from the south-west direction. It was perfectly protected from the front by the Ruż river, which flows parallel to the old border.
But there was no battle for Łomża in 1941. Germans took the city the very next day after crossing the border and the Soviets stampeded eastwards offering no resistance along this part of the Molotov Line.
Only five pillboxes were built in Uśnik but many more were on the drawing board, construction of some of them reached just the stage of initial earthmoving. The builders apparently suffered from the shortage of water – a lot of water is needed during such massive construction effort – and a huge concrete tank (looking almost like a swimming pool) was built on one of the hills. Water was distributed from there to the nearby construction sites.
Although they were not effectively used in combat all the pillboxes in the area are utterly destroyed, either by the Germans testing their resistance to the explosive charges, or by the Polish or Russian army engineers who could utilise the sites right after the war for disposing of unused or dud ammunition scattered across the fields.

Three-loophole heavy machine gun pillbox featured on the photo suffered a similar fate. Destroyed almost beyond recognition is a silent testimony to the power of explosives which had been used to end its life.