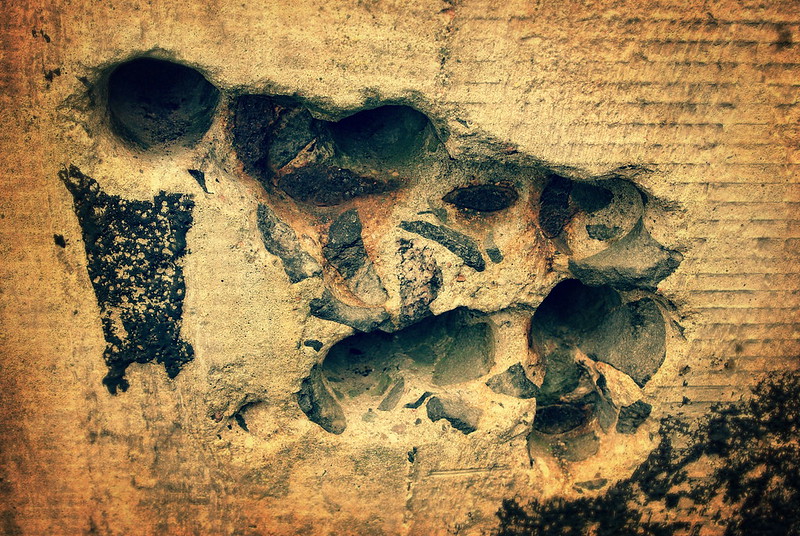 Almost like an abstract - outer wall of the pillbox with neat holes made by direct hits of artillery. Most probably these are not typical combat scars, it seems the German gunners trained their small calibre 3,7 cm PAK 36 gun (or similar) at the wall to see the result of the impact. They probably did it after the pillbox was abandoned since such aggregation of hits would hardly be possible in combat situation.
But German shells which in 1941 pierced through the layer of concrete reveal another piece of forgotten history.
The black stone visible in the holes was a precious building material which was brought all the way from the Caucasus mountains. It was expensive and there was never enough of it so a regular stone, collected locally, was crushed into small pieces and was widely used, too.
I wonder who were the people who toiled their lives away in forced labor camps and stone quarries from which the building material was coming. Because what was expensive was the stone and coal to fuel the endless trains bringing it far to the western, newly conquered part of the Soviet Union. People were not expensive, they were expendable and there was always enough slaves to propel the mercilles machinery of gulag.
It's a strange feeling to run my fingers along the edges of these holes touching the black stone. It's like stretching my hand to touch the shoulder of an unknown human, long gone and forgotten, whose life had probably rotten away somewhere far away in a hell hole of a labor camp.
For the glory of the Empire.