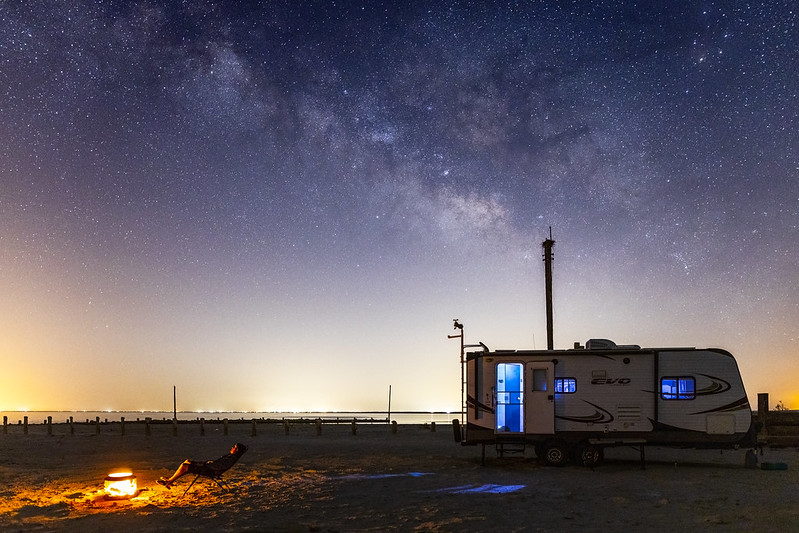 Enjoying the night sky while sitting by a campfire near the shore of the Salton Sea. I shot this a couple weeks ago at the abandoned Salton Sea Naval

Another self-portrait among the ruins of the Naval Auxiliary Air Station Salton Sea. If you use your imagination, this could be visualized as a shipwreck - even though it's just a bunch of pilings and power poles.

This location was a United States Navy military facility located eight miles south of Salton City, California on the west shore of the Salton Sea.

It was an auxiliary field to NAS San Diego commissioned in 1942, had a barracks for over 600 men constructed there. It was disestablished in 1946. NAF El Centro then took over the facility using it for parachute tests of the manned space program and other military systems until 1979. There remains little if anything of the former field. The Salton Sea has taken over much of the runway.

In 2001 the United States Bureau of Reclamation used the site to remove salt from the Salton Sea, as high salinity is a major problem facing the inland lake. They used modified snowmaking equipment and mine waste removal vehicles and continued testing for a year; however high energy costs and air quality issues forced the termination of this project.

Meanwhile, the Salton Sea is rapidly drying up and needs to be saved. Please check out and support the Ecomedia Compass if you want to help restore the Salton Sea its former glory.