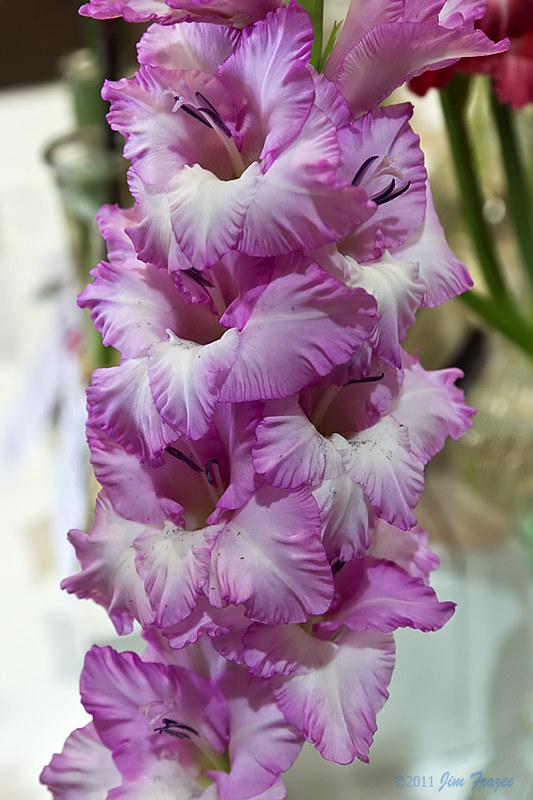 My dad was a world-class hybridizer of Gladiolus (if you Google "Edwin Frazee", you'll still find a few articles about him, even though the Internet came into being after he was most active) but I was unaware of the process until middle age. It's really interesting, but a lot simpler to explain that it is to do. Both my mom and dad used to spend long hours in the fields, every day for weeks, often by themselves, judging and taking meticulous notes about the tens of thousands of different varieties that he created.

Basically, the process of hybridization consists of taking the pollen from one flower and painting it on another one which has had the stamen removed, so that it doesn't self-pollinate. Next, the stigma is covered, so that it can't be pollinated by birds or insects. When the seed ripens, it is removed and saved, to be planted back the next year.

Each one of the seeds is a unique species of Gladiolus, just like human children are unique, but they usually don't produce a flower in that first year, so they can't be judged, but they do produce little cormels, (or bulblets, as we used to incorrectly call them) which are clones of the individual seeds and are kept separate, and marked according to which varieties were used for the breeding, until they are replanted the following year.

Once those flowers bloom is when the difficult part comes into play, because each one must be looked at and judged against 6 or 7 different criteria, and the results recorded, which was my mom's job, although she would often offer her opinions, too. It varied widely, but there were usually 18-24 inches of row of the cloned bulblets from one individual seed. Each one of the stems would also produce bulblets, so the varieties would multiply relatively rapidly.

At the end of the season, the bulbs (corms) were harvested, kept separate by variety, and planted back the next year to go though the same process of judging, with the ones that weren't worth keeping being discarded. I'm sure that my dad had as much or more difficulty discarding varieties as I do discarding images. On many years, they would set new seed and the process would start all over again.

As I recall, it used to take 7 to 10 years to multiply the varieties to the point where we could put them into production, and they produced no income, only expense, during that time. So, you can see that this was a very expensive process and a reason why my dad had few competitors. New varieties were always in high demand, though, which was one of the reasons for my dad's commercial success.

This glad might be one of the varieties that my dad hybridized or it might have been hybridized by the person who entered it in the fair. Either way, it is a beautiful specimen that brings back lots of memories.