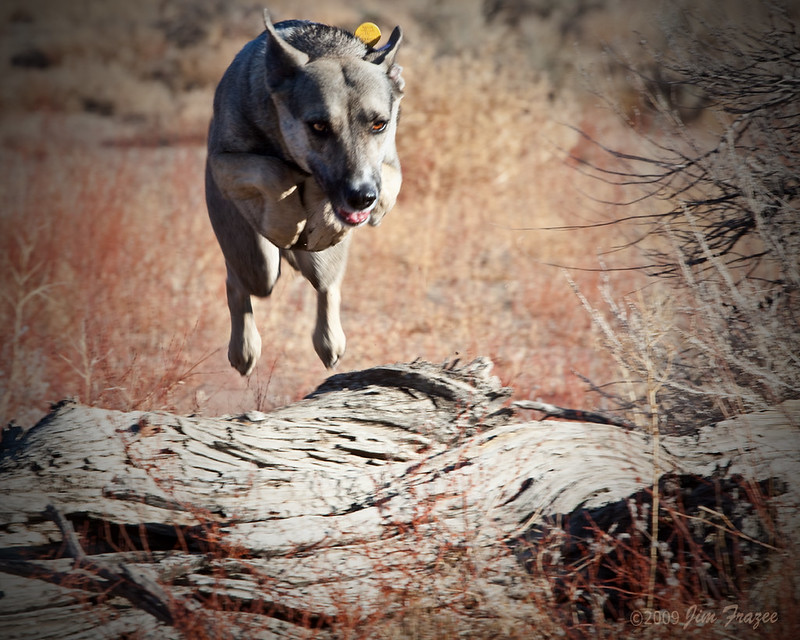 Sadie's story might bring a tear to your eye, but it is very heartwarming, nonetheless. When Jackie first saw Sadie, she was a feral dog that was usually at the same place, on the way to her work. After a few days of seeing her there, she started leaving food and water for her every day and kept it up for two or three months. Even though Sadie started to build a trust in Jackie and was obviously happy to see her drive up, she wasn't always there and Jackie began to have concerns over her safety and well-being.

Finally, one day, Jackie decided to take her home, being confident that she could find a home for her. So, she boldly scooped her up and put her in her car. Sadie just stood there, shivering, but was otherwise not a problem for Jackie. At home, Sadie clearly didn't like being confined and she kept jumping the fence in the back yard, only to come around to the front and hang out. After a few occasions of that behavior, Jackie decided to put a hot wire along the top of the fence and it only took one time of her getting stung for Sadie to give up on the fence jumping.

Jacking did, eventually, find a home for Sadie, with her friend, but she couldn't take her right away and she asked that Jackie keep her for a month, until she was ready to accept her. When she finally did get the call that her friend was ready, she began to have second thoughts and called her back, the next day, saying that she was sorry, but that she was going to have to renege on the deal. Sadie has lived Jackie, ever since, and has turned out to be a very sweet, happy member of the family (although she is still quite independent).

As Jackie was training her other dog, Greta, in Search and Rescue area search, she decided to train Sadie in trailing and, after many months of hard work, Jackie and two of her dogs are certified with our sister organization, Search Dogs of Riverside County, the first teams to start with and go all the through to certification with that organization. Jackie has converted Sadie from a wild, independent dog to a productive member of society, who receives lots of love and has no worries over her next meal or finding a warm place to sleep.

The occasion of my meeting Sadie was some testing that Jan and I did, yesterday, for NASAR (National Organization of Search and Rescue). Jackie had graciously agreed to be a subject for two of the tests and she brought two of her dogs along for the companionship and the exercise. We tested three teams in six different tests, including two 160 Acre tests, during the day (which I evaluated) and two 80 Acre tests, at night (which I got to be the subject for). Thankfully, everybody passed! It was a long day, but very gratifying.