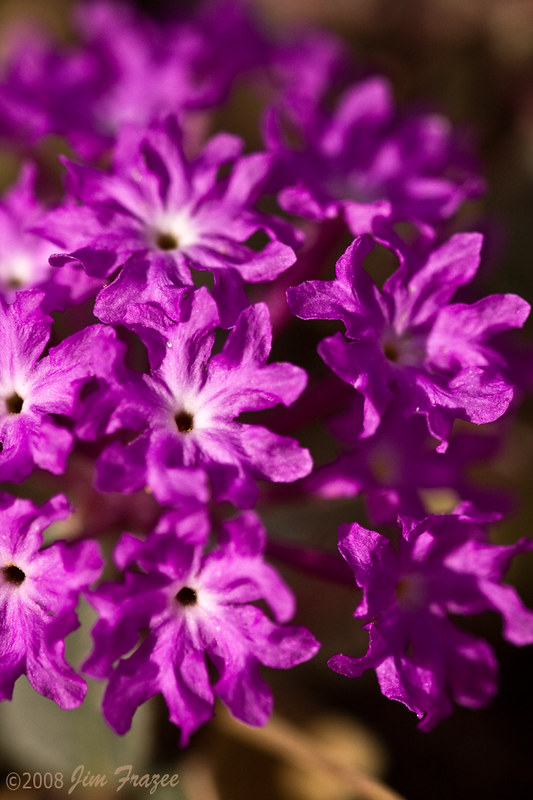 I was surprised to see wildflowers in November, especially ones this beautiful. They're pretty small, as you can see in the bottom photo, compared to the pine needles, and were sprinkled all over, but mostly in a generally straight line.

The location was Fobes Ranch, which is in the southern foothills, at the 4,000' level, of San Jacinto Peak (10,834'), the second highest peak in Southern California, behind San Gorgonio Mountain (11,499'), aka Big Bear. On the east side of San Jacinto, the Palm Springs Aerial Tramway climbs from 2,643 feet above sea level to 8,516 feet at an angle so steep that they had to use helicopters to carry in the materials to build it. We've ridden the tram with our dogs on searches a couple of times, which was thrilling to say the least. The cars are large, rotating vessels with glass all around, that hold about 20 people and it seems like they go straight up at times. The dogs did fine, but we sat on the floor with them, pretending to be offering comfort to them, when it was really the other way around.

Fobes Ranch borders along Highway 74, the "Palms to Pines Scenic Byway", which is an interesting 67 mile (1 1/2 hour driving time) route, the most notable feature of which is steep switchbacks along the route, providing spectacular views of the desert below. For a bit of trivia, one of those switchbacks is where they filmed the opening scene for the 1963 movie "It's a Mad Mad Mad Mad World", where Jimmy Durante's car flew over the edge in slow motion, then continued to slide after it landed for what seemed like minutes. It was a funny movie, but I'm not sure many younger people would enjoy it, because they wouldn't recognize most of the cast of dozens of stars from the past, which is what really made the movie. On second thought, yes they would -- it was one of the funniest chase movies they made and the sub-plots were continuous and cleverly weaved together at the end. Rent or buy it -- you'll enjoy it.

A couple of miles from Fobes, the Pacific Crest Trail crosses Highway 74. This is a hiking trail that goes from the Mexican border to the Canadian border. It's a beautiful, much varied trail, with limited water in some places, but a few people, called through-hikers hike the trail from one end to the other every year. The trek requires a great deal of planning, because you have to have to know where the water is and most people stash supplies along the route, so they don't have to carry them. The trip takes a minimum of three months and the through-hikers encounter all kinds of weather, as you can imagine.