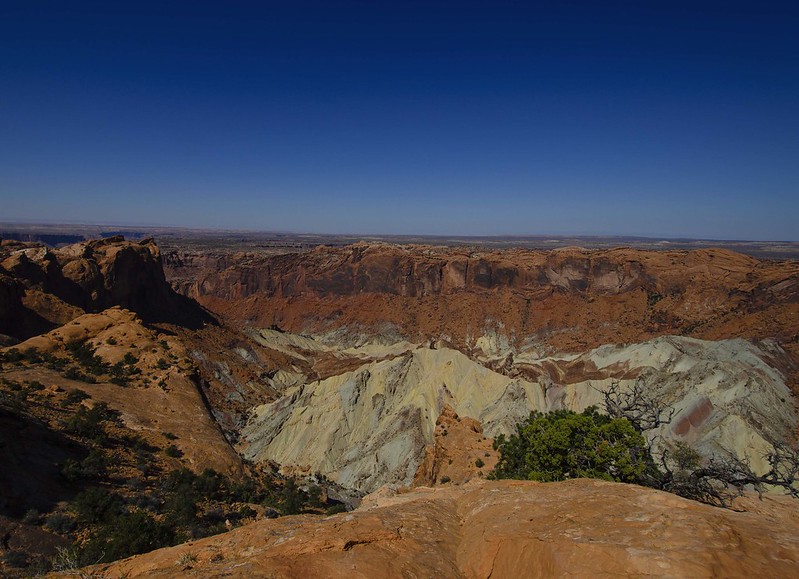 The Impact was felt around the world!

According to Wiki-Upheaval Dome is an impact structure, the deeply eroded remnants of an impact crater, in Canyonlands National Park southwest of the city of Moab, Utah, in the United States.[1] The crater is located in the Island in the Sky section of the park, and is approximately 42 miles (67 km) by vehicle from Moab.

It is approximately 5 km in diameter and the crater is estimated to be less than 170 million years old (Jurassic or younger.) The crater is clearly visible on the surface as bright brown and black concentric rings.

Stratigraphically, the oldest formation exposed in the center of the dome is the Permian Organ Rock Shale. This is overlain by the Permian White Rim Sandstone. Both are sometimes considered part of the Cutler Formation. Overlying these are the Triassic Moenkopi Formation (which is bounded top and bottom by unconformities), the Chinle Formation, the cliff-forming Wingate Sandstone, the Kayenta Formation, and the crossbedded Triassic-Jurassic Navajo Sandstone.[2]

Structurally, the dome is quite anomalous. Most of the rock strata of Canyonlands National Park are flat-lying or gently dipping. The center of the structure is a true dome. Some strata near the center are nearly vertical in orientation. Dips of 70 degrees have been measured in the Kayenta Formation on the U-shaped plateau surrounding the center of the structure. A syncline surrounds the center, where the axis forms a complete circle approximately two miles across. The syncline is primarily visible in the Navajo Sandstone. Another anticline has been mapped to the north of this ring syncline, which is also concentric with it.[2]

There were two well-known theories as to the origin of the upheaval. One theory was the upheaval is a salt dome, an anticlinal structure which occurs when a salt diapir is pushed up by the weight of overlying rocks.

The other theory is an eroded impact crater, like the much younger Meteor Crater near Winslow, Arizona. In the 1990s, a team of geologists and seismologists from NASA and the University of Nevada at Reno performed a detailed study that included seismic refraction and rock mapping. The results of this study support the meteorite theory.[1][3] In 2008, it was announced that shocked quartz was discovered.[4] This confirmed the meteor impact theory because the rocks were subjected to high pressures only possible in an impact or a nuclear explosion