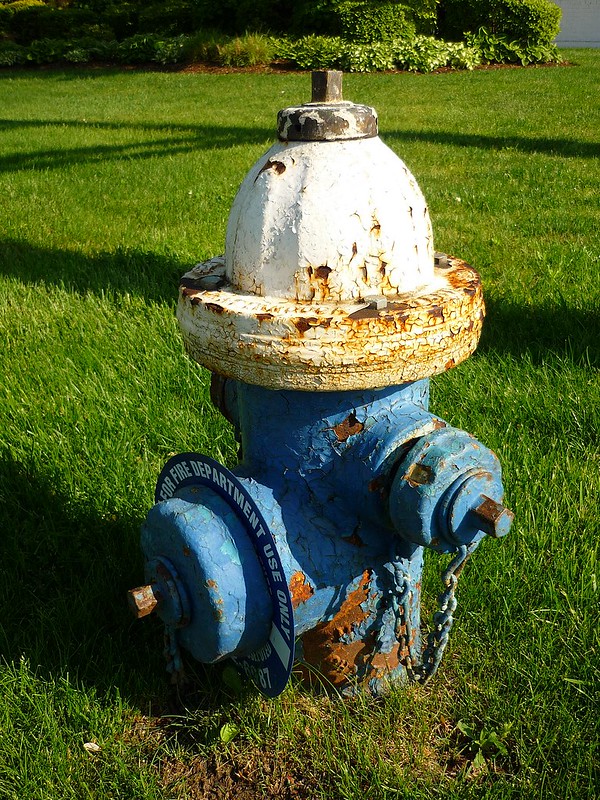 A fire hydrant (also known colloquially as a fire plug in the United States or as a johnny pump in New York City, because the firemen of the late 19th century were called Johnnies), is an active fire protection measure, and a source of water provided in most urban, suburban and rural areas with municipal water service to enable firefighters to tap into the municipal water supply to assist in extinguishing a fire. Buildings near a hydrant may qualify for an insurance discount since firefighters should be able to more rapidly extinguish a fire on the insured property.

Hydrant coloring may be due to either purely practical criteria or more artistic. In the United States, the AWWA and NFPA recommend hydrants be colored chrome yellow for rapid identification apart from the bonnet and nozzle caps which should be coded according to their available flow. Class AA hydrants (>1500 gpm) should have their nozzle caps and bonnet colored light blue, Class A hydrants (1000–1499 gpm), green, Class B hydrants (500–999 gpm), orange, and Class C hydrants (0–499 gpm), red. This aids arriving firefighters in determining how much water is available and whether to call for additional resources, or find another hydrant. Other codings can be and frequently are used, some of greater complexity, incorporating pressure information, others more simplistic. In Ottawa, hydrant colors communicate different messages to firefighters; for example, if the inside of the hydrant is corroded so much that the interior diameter is too narrow for good pressure, it will be painted in a specific scheme to indicate to firefighters to move on to the next one. In many localities, a white or purple top indicates that the hydrant provides non-potable water. Where artistic and/or aesthetic considerations are paramount, hydrants can be extremely varied, or more subdued. In both instances this is usually at the cost of reduced practicality.

In Germany, most hydrants are located below ground (Unterflurhydrant) and are reached by a Standrohr which provides the connections for the hoses.