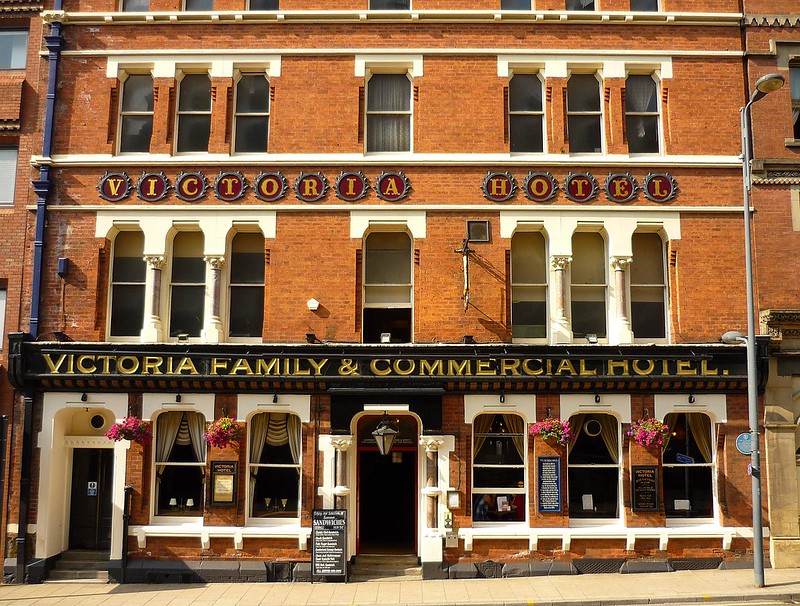 Article about The Victoria Hotel by Chris Arnot for The Telegraph newspaper, 4 July 2008:

Leeds Town Hall is built on the scale of a municipal palace and the pub to which it was once connected by an underground passage exudes a similarly grandiose aura of mid-Victorian confidence.

This is not just the Victoria Hotel, but the Victoria Family and Commercial Hotel. It says so in capital gold letters on a black background. Nothing is understated about the building, inside or out.

The Vic, however, is no longer residential. Gone are the days when judges would don their robes in upstairs rooms before striding down the passageway to ascend the bench at the city assizes. New courts were built around the corner in the 1990s, but lawyers still feel themselves called to the bar of this splendidly flamboyant gin palace to celebrate or commiserate after a case.

Among the other stalwarts are local politicians. Yorkshire aldermen with watch chains draped across corpulent stomachs are engrained in the pub's history. It's easy to imagine them gossiping in the elaborately embellished mahogany booths that run along one side of the main lounge bar.

Each booth offers comfortable leather seats, surrounded by decorative tiles and cut-glass mirrors. Stained glass gleams on the other side of an ornate bar on which a small blackboard advertises Pimm's by the jug or glass.

The Vic is no longer owned by that one-time Leeds institution Joshua Tetley (now a subsidiary of Carlsberg UK), but there's a good choice of rotating real ales. Two ever-presents are Barnsley Bitter and Timothy Taylor's Landlord from nearby Keighley.

The Landlord apparently laces the steak and ale pie (£6.95), one of the house specialities. The other is the humble sausage. No fewer than 13 varieties grace the menu. They come from John Pettit, the Grimsby-based butcher who supplies Fortnum & Mason.

Grandeur indeed! There can't be many pubs in England where you can dine on toad-in-the-hole made from Yorkshire pudding and punctured with Scottish venison, juniper berry and gin-flavoured bangers (£7.95), and where you can wash it down with Pimm's No. 1.