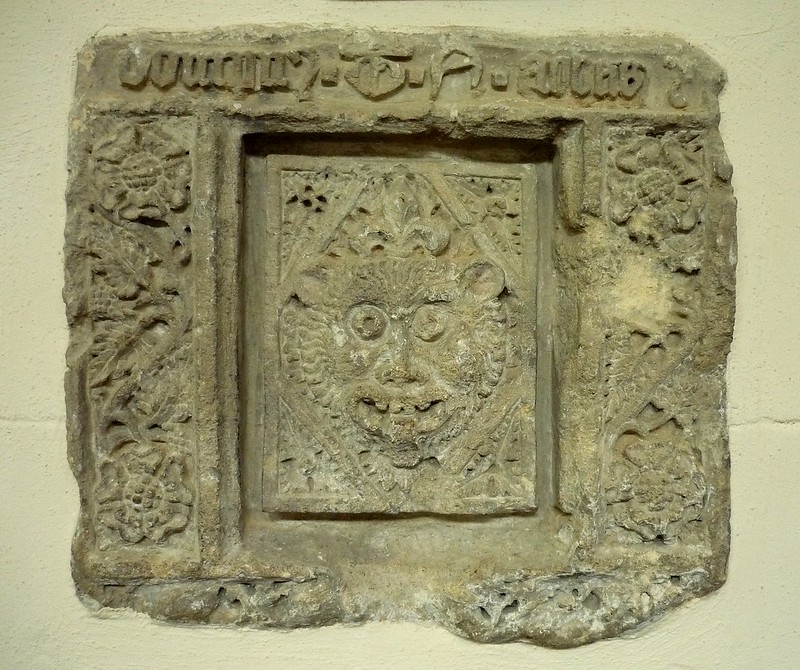 Carving of a Green Man in the shape of a lion's head found in a local cottage garden in 1931and returned to the church. It is believed to have come from a monument to Thomas Newbold, Abbot of Evesham from 1491 to 1513. He was the convent cellarer before being elected abbot.

A Green Man is a sculpture, drawing, or other representation of a face surrounded by or made from leaves. Branches or vines may sprout from the nose, mouth, nostrils or other parts of the face and these shoots may bear flowers or fruit. Commonly used as a decorative architectural ornament, Green Men are frequently found on carvings in churches and other buildings (both secular and ecclesiastical). "The Green Man" is also a popular name for English public houses and various interpretations of the name appear on inn signs, which sometimes show a full figure rather than just the head.

The Green Man motif has many variations. Found in many cultures around the world, the Green Man is often related to natural vegetative deities springing up in different cultures throughout the ages. Primarily it is interpreted as a symbol of rebirth, or "renaissance," representing the cycle of growth each spring. Some[who?] speculate that the mythology of the Green Man developed independently in the traditions of separate ancient cultures and evolved into the wide variety of examples found throughout history.

Superficially the Green Man would appear to be pagan, perhaps a fertility figure or a nature spirit, similar to the woodwose (the wild man of the woods), and yet he frequently appears, carved in wood or stone, in churches, chapels, abbeys and cathedrals, where examples can be found dating from the 11th century through to the 20th century.

To the modern observer the earlier (Romanesque and medieval) carvings often have an unnervingly eerie or numinous quality. This is sometimes said to indicate the vitality of the Green Man, who was able to survive as a symbol of pre-Christian traditions despite, and at the same time complementary to, the influence of Christianity. Rather than alienate their new converts, early Christian missionaries would often adopt and adapt local gods, sometimes turning them into saints.