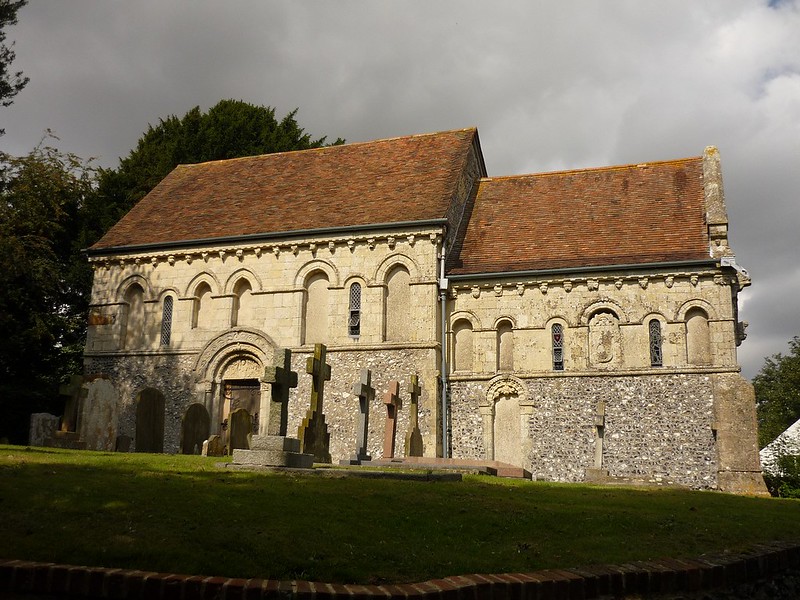 The church of St Nicholas in the tiny hamlet of Barfrestone was founded in the late 11th century by a Norman knight called Hugo de Port and was remodelled around 1180 with the addition of over 100 superb carvings which were probably funded by Adam de Port, Hugo's great-grandson, as thanks for a beneficial marriage he contracted in that same year.

Barfreston is located on the route that was travelled by thousands of Medieval pilgrims on their way to the shrine of St Thomas Becket at Canterbury. A likeness of Becket is carved over the south door, the first known example in England.

The church is small - less than 50 feet from west to east - and is a complete two-cell Norman church unlike any other in Kent. Its lower walls are constructed of flint rubble, but its upper courses and dressed stonework are made of imported Caen stone (the same stone that was used to build Canterbury Cathedral). Kent has no local stone that can handle fine carving, so the excellent detail here is unrivalled in the county.

The south door is a masterpiece of Norman sculpture, and the tympanum and arches contain some of the finest Norman carvings in Britain. A figure of Christ stands at the centre of the tympanum, and two mermaids, a griffin, and a figure of a sphinx are at his feet. The door frame is composed of three bands of carvings which represent a wide variety of religious symbols, mythical birds and creatures, signs of the zodiac, and scenes from medieval domestic life.There is also some fine medieval graffiti on the dressed stonework - both inside and out.

A frieze of carved human and animal heads runs around three sides of the Church. The north door is beautifully carved as well, with a pair of grotesque heads facing each other across the door opening.

The east end of the Church has a large wheel window with eight spokes and more carvings set in niches in the wall.

The church has no tower, so the bell is hung from the boughs of a yew tree outside the west side of the nave.

The interior, although simple, has a superbly carved Norman string course in the nave and chancel, with Norman dog-tooth designs and figures of animals and humans.