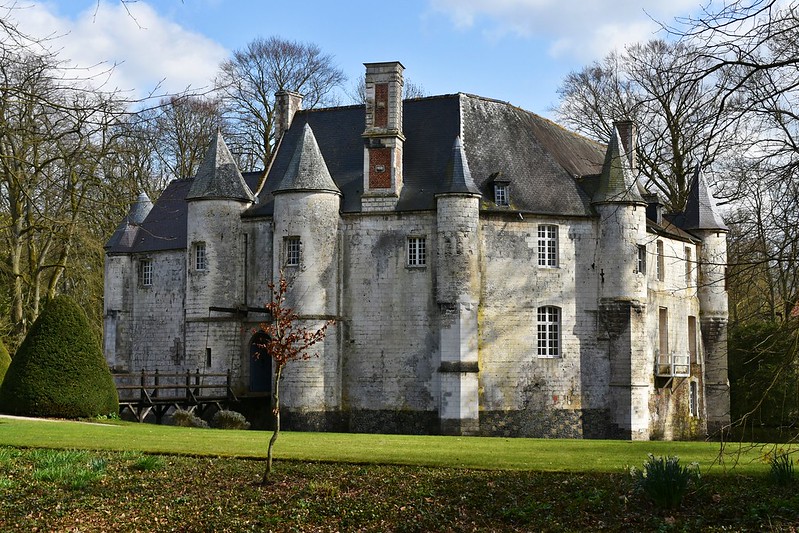 Creminil means 'manor of chalk'. The present castle was built in the 15th century on the ruins of a bastide destroyed by the English after the Battle of Crécy in 1346. It was badly damaged by fire in 1543 and restored/rebuilt in the 1600s. This typical late medieval residence consists of a twelve-sided irregular polygon, built on a rounded mound surrounded by large ditches fed by water from the River Laquette. The walls are high in chalk cut on older basements of flint and sandstone-paired checkerboard. The buildings are reinforced at the corners by towers, corbelled turrets and buttresses with watchtowers. The drawbridge and its old door, still with its old knocker (a door hammer mounted on a hinge), serve an inner courtyard lined with residential buildings and gardens which were remodeled in the 18th century. In this respect, Castle Creminil is a charming example of architecture designed for the approval of a lord.

The first known lord was Nicolas de Crasmainil in 1210. Then came Raoul Cros Maisnil in 1329. He was a vassal of the famous Countess Mahaut d'Artois. When Raoul died, the fiefdom returned to Mahaut. An archival piece dated 1443 mentions the delivery by the locksmith, Jean de Bailleul, to Jean Le May, vice-mayor of Saint-Omer, of several thousand nails "which were converted and used in the house belonging to the Le May Family". The supply of such a large amount of nails can only be explained by extensive carpentry or carpentry work, most likely marking the completion of the construction of the castle, which had to be largely restored after the ravages of troops in the sixteenth. After the Le May Family, mentioned again in 1461, came Hugues de Buleux in 1540. He was counselor of the regent of the Netherlands and Grand bailiff of Aire. In 1670, Antoine de Wignacourt took ownership, and from 1687 until the French Revolution, the castle was occupied by Le Merchier Family. After the Revolution, the castle belonged to Madame Lhéritier, whose family owned it until 1978.