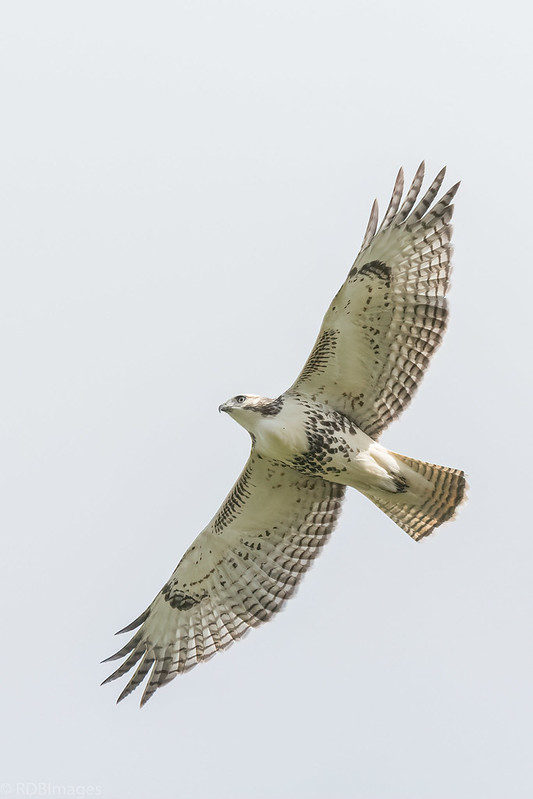 Here is Mike's reponse. This is a very beautiful and also very pale juvenile Red-tailed Hawk, with the white head, darker malar and collar, snow-white base colour to the underside, extensive white mottling, or what we call spangling on the topside, and the pale tail base.

Pale juvenile Red-tails are amongst the most difficult to separate to subspecies. In Alberta we need to consider both light-morph Harlan’s as well as Krider’s genetics in our melting pot of 5 breeding Red-tail subspecies. So it’s a bit complicated! It’s likely this is a locally-fledged bird, so essentially this type of pale juvenile has either Harlan’s (B.j. harlani) or Krider’s (B.j. kriderii) lineage, in some proportion as an intergrade, most commonly with eastern (B.j. borealis). We can really never expect anything close to pure Krider’s subspecies blood lines around here. The moderately heavy bellyband is an example of a trait that points back to it being an eastern x Krider’s intergrade. Bona fide Krider’s juveniles in places like South Dakota are strikingly pale, and very lightly marked below, even more so than your bird.

So overall the bad news is, juvenile Krider’s and juvenile Harlan’s can be nearly identical in the field from most angles, especially perched. They share all of the ID points that I listed above. The biggest difference that is most evident in flight shots such as you have is the banding in the primary and secondary flight feathers, and the tail banding. Young birds that have Krider’s lineage normally have normal, or relatively thin and uniform flight feather banding. Young Harlans types most often have thick, mottled, or otherwise messy flight feather banding.

So all that said, with the more or less normal flight feather banding, your juvenile is best for eastern as an intergrade in some proportion with Krider’s. We do see a few like this every year, as well as some adults that present as mostly eastern but with a pale head and tail base. Most likely what your bird will most into as an adult!