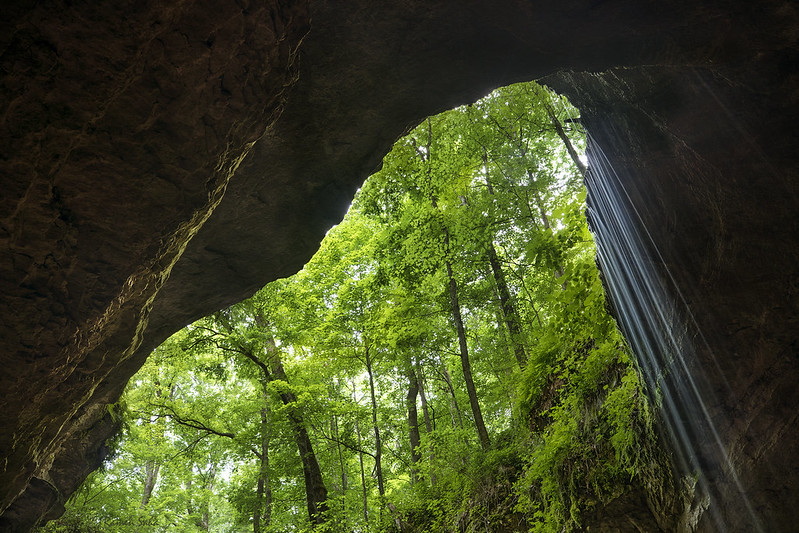 Eons ago in Kentucky, forces of erosion – mainly rainwater – percolated through sinkholes and dissolved underlying limestone layers. However, the sandstone-capped ridge (insoluble to water) above the limestone layers remained intact. Such erosion created air-filled passageways underground with a hard sandstone ceiling. These passageways – caves – are mammoth… bigger than the NYC subway passageways in many places.

Two to three thousand years ago, pre-historic ancient natives of the area explored these caves. Wearing waist-cloth and armed with cane torches, they mined ‘white crystal’ – a mix of gypsum, selenite, epsomite, mirabilite, and other minerals – from walls of these caves. The white mineral likely was intended for trade and medicine. They spent hours inside the cave to harvest as much white crystal as they could before their cane torches succumbed to the caves' pitch black darkness.

At the turn of the 19th century, a certain hunter – Mr. Houchins – accidentally discovered the natural entrance to these caves while unsuccessfully chasing a bear. The entrance – wearing a shy waterfall – was a sight to behold (shown above and on the NPS poster for the park). Soon after, locals discovered that these caves are rich in potassium nitrate, or “saltpetre”, the key ingredient of gunpowder. Soon, slaves were deployed to dig and carry nitre-bearing earth from far parts of the cave to processing vats. Processed saltpetre from these caves were heavily used in the war of 1812. As pointed out by many astute minds, it is indeed ironic that the nation’s freedom was retained on the back of men devoid of that exact commodity.

After the war, the demand for saltpetre dwindled and most slaves switched jobs and became tourist guides. People realized that money could be made by offering cave tours to paying public and seized the opportunity by erecting commercial prospects in the area. The most prolific of these guides was a young man named Stephen Bishop, who charmed tourists both with his oratory skills and physical attributes. Incidentally, Mr. Bishop was owned by the then owner of the caves, a doctor named John Croghan, who specialized in 'treating' tuberculosis. The good doctor presumed that the refreshingly cold and humid cave air had healing properties and built recovery chambers underground for many of his tuberculosis patients. Sadly, the doctor was wrong as he himself was claimed by the disease in 1849.

In the next century, responding to the great depression after the first world war, President Roosevelt created the Civilian Conservation Corps, where unmarried young men were enrolled, and sent off to stations far away with the objective of undertaking ‘complex work’, like, ‘the prevention of soil erosion, flood control, and similar projects’. One such project was to develop the Mammoth Cave as a National Park. In 1930s, CCC arrived at the mammoth caves and undertook construction of housing and cave trails.

One day in 1935, while building cave trails, CCC workers Campbell and Cutliff discovered a gothic scene in the cave. Beyond a sharp ledge, they found the body of a man in waist-cloth pinned under a big boulder. This was the body of an ancient white crystal gatherer who had entered these caves on a fateful day 2-3 thousand years ago and was trapped under a boulder that was likely displaced by his own digging of the cave wall. The constant temperature and humidity in the cave, along with the nitre in the soil, had mummified and preserved this unfortunate archaic man in this delicately beautiful purgatory.