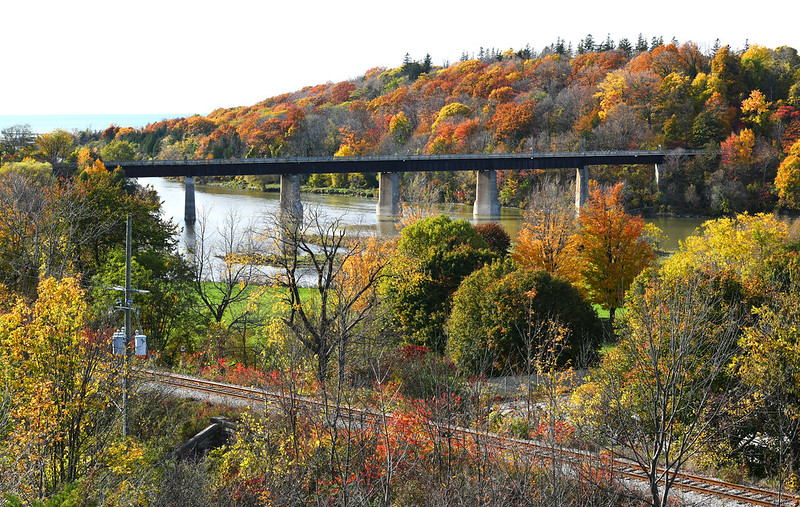 Formerly a Canadian Pacific Railway Bridge built in 1906, is now a walking bridge for hikers to enjoy a walk along the former railway track route.

The Menesetung Bridge was vital to the development of Goderich as a thriving port town. The train service which crossed the Maitland River via the Menesetung Bridge on the Canadian Pacific Railway (CPR) Guelph-Goderich Line brought business and passengers to the harbour town and, through their commerce and trade, Goderich flourished. The construction, which began in 1906 by M.A. Pigott of Hamilton, was often delayed due to disputes with the competing Grand Trunk Railway (GTR).

The Menesetung Bridge's official opening ceremonies took place on September 19, 1907 and the bridge served the Town of Goderich and the CPR for over 80 years. In 1988, the final CPR train stopped on the bridge and blew its whistle for a final time. Today, due in large part to the efforts of the local community to save the bridge when it was threatened in the early 1990s, the Menesetung Bridge serves as a pedestrian bridge as part of the Maitland Trail.

The Menesetung Bridge was the longest bridge in Ontario at the time of its construction and is a fine example of a typical Canadian Pacific Rail bridge. The seven spans each measure 104 feet in length and 12 feet in width, creating a total length of 750 feet. The bridge is held up by 2 abutments and 6 concrete piers which rise about 60 metres from the Maitland River. The embankments were reinforced with millions of tons of earth, which also reduced the grade from the Township of Colborne into the Goderich Harbour.