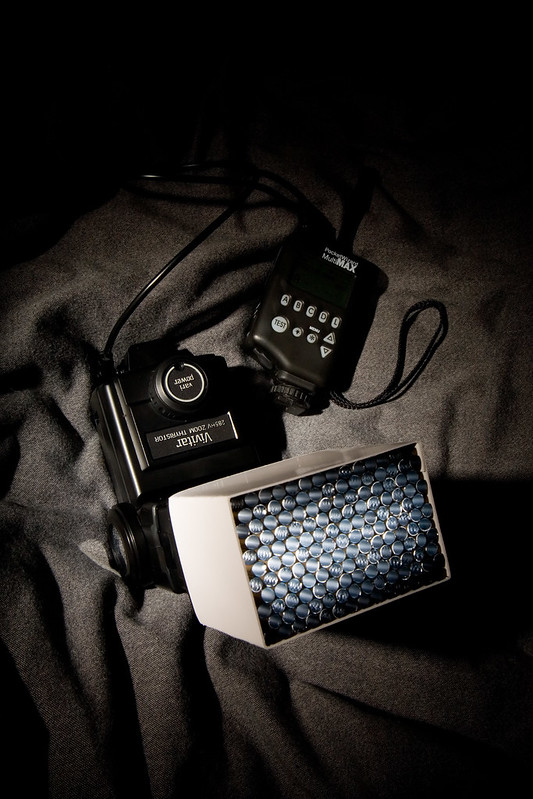 Instructable up at Black Straw Grids for the Vivitar 285HV!!!

I spent most of the day building some 2" DIY black straw grids for my new Vivitar 285HV flashes, inspired by Strobist amongst others. This is the first result of their use, rampant recursion. Flash, light thyself! This picture is basically straight from the camera, with a little healing to remove stray Peaches fuzz. My time was well spent, I think.

I came up with a bunch of optimizations on the build methods described in the tutorials I read. My grids are tight. Literally! They're an excellent friction fit on the slightly beveled flash head. Once I tape the corners and spray them black, they'll look professional.

Most people make these things out of cereal boxes, they're often called cereal box snoots and grids. I, of course, made my Two Inch Grid 1.0 out of a Diet Pepsi 12 pack. ;)

- For the grid, get some black straws and cut them into 2" lengths. You may want to cut them to 1/4-straw lengths to be frugal and not waste anything, but I wanted any math I had to do to stay simple. I'm taking the off-sized ones and using them for a 3/4" grid later, instead.

- Optimization: If you have a friend help, you can crank out the straws at precise lengths and with square ends, using a cutting board. One person holds four to six straws, stabilizing them on each side of the blade, the other guy does the chopping. Watch those fingers! This way you can cut a bunch at once, and they don't go flying all over the place, so you can chop chop chop like crazy without re-chopping the scattered ones!

- Find some thin but sturdy cardboard. I used the box from a food mill my partner just got. You probably have a cereal box or twelve-pack you could use.

- Optimization: When marking the cardboard, use a ball point pen and really crush the hell out of it, scoring the surface, but not cutting it. This will make folding the snoot a piece of cake! None of that "use a ruler to bend it" crap in the other tutorials!

- Fold the snoot into shape (a rectangle of course), creasing the corners well.

- Optimization: If you used a glossy cardboard, sand the outside of the 1/2" tab and the first 1/2" of the inside of the other end of the strip a bit, to give your glue more texture to stick to. Do this after folding the snoot into shape, or the scratches the sanding leaves will make your fold all messy looking!

- After placing it on your work surface with side 2 on the bottom, slightly open the snoot back up, towards you, as if you had just opened a box of donuts that had no sides.

- Glue the straws into a honeycomb pattern, one layer at a time.

- Optimization: Use silicone! It's easy to work with, and heat resistant. First run two beads of silicone along the bottom of the snoot, at 1/2" and 1 1/2". Then, starting from the back, simply press the straws down into the silicone, leaving a half-straw width gap when you reach the front end. Run another two beads of silicone across the top of the completed layer of straws. For the next layer leave a half-straw gap at the back, and press straws down into the silicone until they're seated firmly between the two straws below. Repeat these alternating layers until you get to the top. My grids were exactly eleven layers deep!

- Optimization: If you use some masking tape on the inside of the snoot where you're eventually going to glue the tab, it will keep the silicone (or whatever you're using) off of the snoot so your paper glue will get a good bond.

- Open the snoot enough to peel it away from the sides of the grid, then run two more beads of silicone along the entire length of the inside of the snoot, except where you'll be gluing the tab.

- Using a paper glue like Elmer's, thinly coat the outside of the tab and the inside of the opposite end and let it get slightly tacky.

- Press the tab to it's mate and mush the sides of the snoot into the beads of silicone, completing it. I used masking tape to hold the tab tight until the paper glue dries.

- Optimization: Put the grid between two boards and clamp it, then clamp the sides to squeeze them together. You'll get nice and square grids when they dry/cure!

- If you like, tape the corners of the snoot for a cleaner look and more durability, not that it will matter with all that silicone holding it together.

- If you like, spray paint it black using very light passes at 12" or more, to avoid runny paint.

Voila! Now you have a sweet, durable, professional looking grid! People will be jealous!