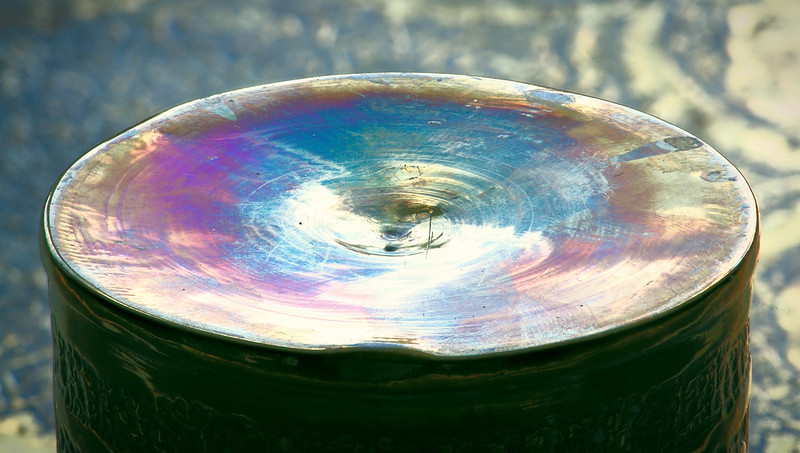 For a while as a child I lived in Abadan, a city in Southwest Iran on Shatt al-Arab river which is the border with Iraq.

If you went to the bazaar in downtown Abadan you’d find local artisans plying their trades: carpets, painting (the paintings on ivory were exquisite) and metalworking. The metal workers would sit in the streets tapping away, engraving and embossing metal objects, both decorative and practical for sale to anyone who might buy - there weren’t tourists as such but there were Europeans living there working with the oil companies with the interest and the money.

It was a good time to be there as a child. In winter my brother and I would paddle across the Shatt in a rowboat from the sailing club and adventure over to the Iraq side. In the summer the sand sharks came up river so we couldn't mess about the same way.

Iranians are ethnically Persian and by nature are a hospitable, gentle, cultured and refined people and it’s hard to realise that this border subsequently was the same one where 1.5 million soldiers were to die in war a few decades later, as militants of the two opposing Islamic factions in the world once again contested for geographic supremacy in the area.

But my narrative is drifting as it is wont to do…

This is a shell case bought by my parents in the Abadan bazaar. It’s been made into a metal box and you can see some of the intricate (though not terribly refined) tooling below. The shell case is two and a half inches wide. The bokeh backdrop behind it is created by a much large heavy brass tray about two feet wide (just used for the colour here).

Much of the metal used by the Iranian metalworkers was recovered from scrap. Old artillery shells could be reworked or melted down and so were prized. You can see that this one has been fired - in the central depression you can see two pits formed by the firing hammer of the artillery piece hitting the central percussion cap. Brass is used in shell cases because when heated by the explosive it readily expands to seal the firing tube.

This is for the Macro Mondays theme today of Copper. Brass is an alloy of copper.

I chose this because of the lovely colours of the patina and circles in the machining of the brass end-cap. The colour comes partly from the colour of the metal salts of the tarnish, but also from the iridescence due to the refraction of light in the thin tarnish coating. So, an iridescent shell just like mother of pearl :)

I have to credit Ali de Niese for triggering the idea - her image today includes a shell case as a base, and it reminded me of this object. The big difference, of course, is that Ali’s has been cleaned attentively whereas this one has been totally neglected for a long time now, lol. But we do have the patina to enoy!

Thanks for taking the time to look. I hope you enjoy the image with its colours. Happy Macro Mondays :)

[Tripod mount in natural daylight; manual focus timer release.
A focus stack of 15 images processed in Affinity Photo.
Lighting toyed with to make the tooling visible and to refine the colours (which look like reality).
16:9 crop.
Dark vignette.]