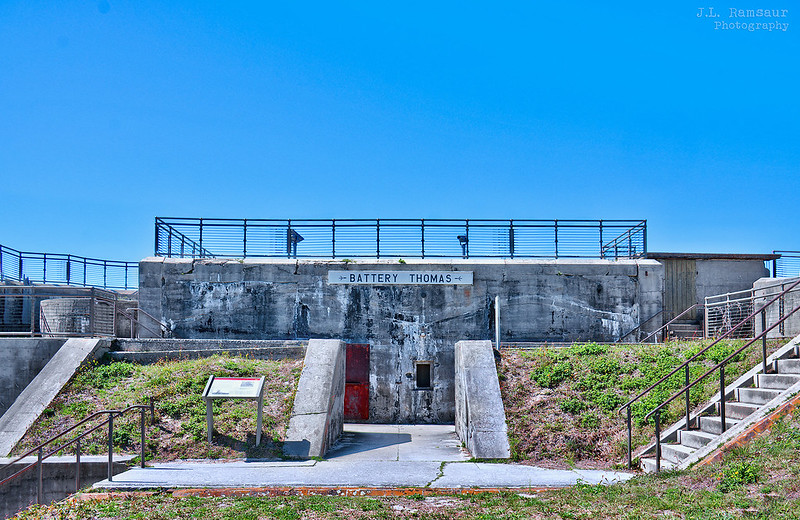 Battery Thomas (1898-1917) was a reinforced concrete, Endicott Period 4.72 inch coastal gun battery located on the grounds of Fort Morgan in Baldwin County, Alabama. The Endicott Period lasted from 1890 to 1910 as part of the harbor defense of Mobile, Alabama. The battery was named in Government Order 78, dated 15 May 1903 after Captain Evan Thomas, 4th U.S. Artillery, who served with distinction in the U.S. Civil War and who was killed 26 Apr 1873 in action with Modoc Indians at the Lava Beds, California. Battery construction started in 1898, was completed in 1899, and was transferred to the Coast Artillery for use on 17 Feb 1899 at a cost of $ 15,000. Battery Thomas was deactivated in 1917.

Fort Morgan was added to the National Register of Historic Places on October 15, 1966 and the National Historic Landmarks list on December 19, 1960.

Three bracketed photos were taken with a handheld Nikon D7200 and combined with Photomatix Pro to create this HDR image. Additional adjustments were made in Photoshop CS6.

"For I know the plans I have for you", declares the LORD, "plans to prosper you and not to harm you, plans to give you hope and a future." ~Jeremiah 29:11

The best way to view my photostream is through Flickriver with the following link: www.flickriver.com/photos/photojourney57/