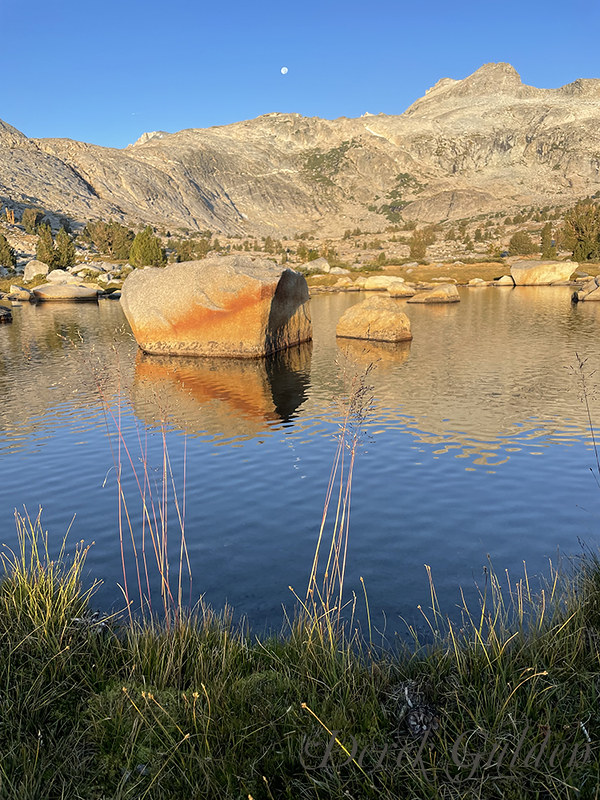 In the fading light as I began my hike back, wisps of smoke seeped in from the northeast. After reaching the Pacific Crest Trail I began climbing back up Donahue Pass. The Lyell Canyon below and behind me was full of soupy purple smoke and it's scent filled my nose. Crooked trees stood silhouetted against the hazy twilight sky while hundreds of footprints and hiking pole craters textured the dirt path beneath my feet.
The darkness quickly thickened and the smoke along with it. By the time I reached the top of the pass the light had completely gone and two planetary spheres where waiting to greet me: Jupiter in front of me to the east and Venus behind me to the west, both floating just above their horizon. Most of the dim stars were hidden by the smoke and only the brightest shown through. I decided to stick to the trail this time, to make nighttime navigation easier.
Before descending I noticed I had cell signal so I made a quick phone call to my dad to let him know how I was doing and why my GPS tracker was still moving around. Then I was off. The world outside the circle of light from my headlamp was unknown, all I knew was 5 feet in front of me and the stars above. Occasionally the sound of flowing water seeped into my awareness but still remained unseen somewhere in the darkness. After many hundreds of steps the trail leveled out and I crossed the stream that now finally appeared out of the darkness.
Now the dark shapes of tall pine trees began to gather around the me. Further and further I pushed into the dark forest until in front of me, through the trees, I saw a red tent glowing in a hollow of the woods. The trail led right to it, though no matter how many steps I took it never got any closer. I now realized that it was actually a newly risen, blood red moon hovering low in the sky, whose brilliance was muted by a cloak smoke draped along the horizon. Once I realized it was the moon I turned my headlamp off, hoping to let the moon's light guide me, but no light did it cast, and the night was just as dark as ever.
Soon I reached the sign and side trail I was looking for, “Marie Lakes →”. I turned here and headed back up hill following the side trail. Over rock outcroppings and stands of shadowy pines this new trail weaved, soon coming to the dark meadow lands where my campsite should be. I have no way to know how far to go, there is no trail leading off this main trail to lead me to my campsite, and no signs to point the way. Outside of the small circle of headlamp light all is dark inky black, except for the dark red moon. A few more steps and once again the voice that showed me the arrowhead told me to stop, “Stop, you are there.” Trusting the guiding voice, I listened and turned right in the direction my campsite should be. After another hundred or so steps, I reached a stand of trees sticking out of the meadows and beneath them was my backpack and gear. I thanked whoever helped me, then set up my sleeping bag, crawled inside and went to sleep.
In the morning the smoke had cleared, and the sky was crystal clear. I headed over to the closest part of Rush Creek and photographed the moonset over the Sierra crest.