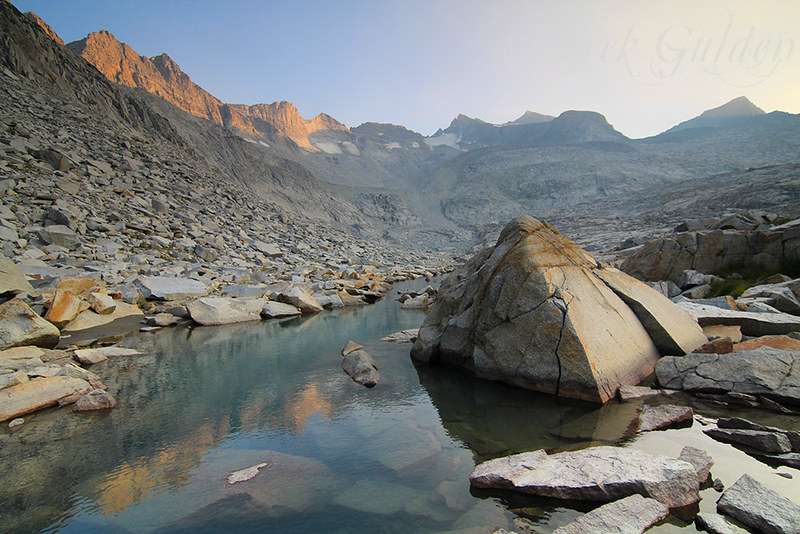 Back at my campsite I went over my options for the day while eating breakfast. No matter what I decided to do, eventually I would end up going into Yosemite National Park via Donahue Pass and my eventual goal was a very narrow lake that lay in the footprint of the Lyell Glacier. I decided on a cross country route from here to there between a hill and a peak. I also decide to make it a day hike since I would be coming back tomorrow anyways and taking my pack was just extra work.
Soon I was on my way. After crossing Rush creek I slowly navigated up steep slopes and slabs, doing my own switchbacks to make the ascent less steep. Once I reached the saddle between the hill and the peak the route became easier. Here atop the saddle were two small, unnamed tarns, reflecting the deep blue sky. I decided to unofficially name them myself, Sky Mirror Ponds, if anything it would just be for easy reference.
Moving on the landscape became more flat as I contoured the mountainside. There was another unnamed lake that I wanted to reach on my way to the pass. To find this like I followed the sound of water flowing under rocks. Soon the much larger lake appeared resting beneath a split peak. I refilled my water here and continued. I wasn't more than 30 steps way from this other lake when in my mind a voice said, “Hey, look down, you might miss something.” I stopped and looked down. Right at my feet was a big beautiful arrowhead. Excited and in awe of the discovery, I picked it up, thanked whom ever helped me find it and thanked the person and peoples who made it, I also took time to thank the mountains and the lake I had just fill up my water at. I took a little more time to admire the craftsmanship of the arrowhead and I put it back on the earth, near where I had been told to look, though more hidden than when we found it. I decided to also unofficially name this lake too, Arrowhead Lake.
From here I finished climbing Donahue Pass and took a long rest. (11085 ft) When I was ready I went down the other side into Yosemite. I came to a beautiful tarn and creek. From here I left the trail again to follow the creek up to my destination. The valley floor was paved in glacier polished granite with large boulders strewn haphazardly about. To my left (South) rose a towering ridge of stone, that was an offshoot of the Cathedral Range. From here I could see the tallest peak in Yosemite, Mt. Lyell at 13,114 ft or 3,997m and Mt. Maclure, the fifth-highest mountain of Yosemite at 12,886ft or 3,928 m. This was also the headwaters of the Tuolumne River.
I explored a bit of this valley and also just sat and absorbed the scenery and energy of the place. Unfortunately I couldn't fully enjoy it due to the commercial airplanes flying over at regular intervals. Places like this, National Parks, Designated Wilderness Areas, National Forests, all paces set aside by the Wilderness Act to preserve the natural beauty of the landscape for future generations should really be no fly zones. To only preserve what the eye can see isn't enough, we need to preserve the quite places and natural soundscapes as well otherwise we have only gone halfway.
As the sun sank lower and the shadows stretched I headed over to the spot I had picked out for sunset photos. As the light grew pink on the peaks I took the photo that I had come here for.