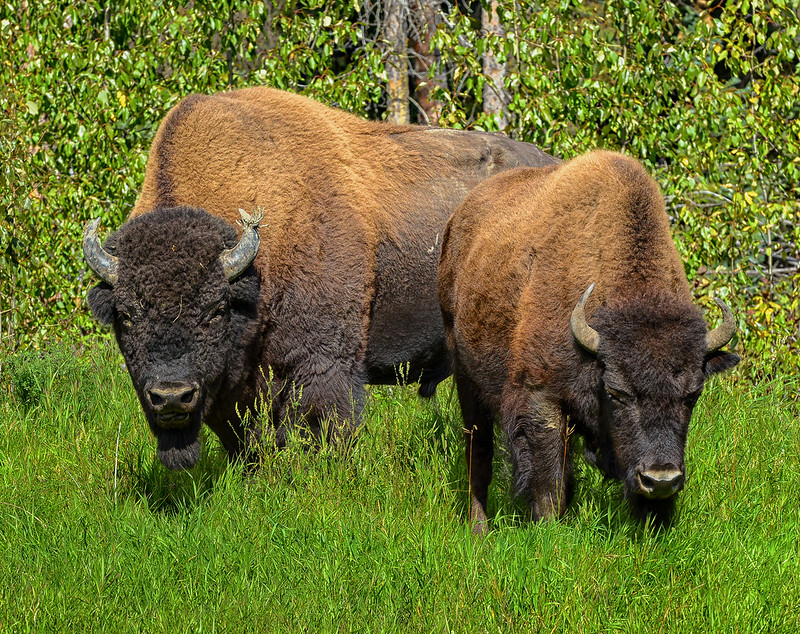 Found this pair of Wood Bison along the AlCan Highway years ago in northern BC.

I'm a big bison fan. They are my favorite critter in Yellowstone. I've been around them often, sometimes fairly close on the roads. But this bull and cow....look at his shoulders, chest and hump. Noticeably larger.

"Unregulated hunting in the 1800s nearly wiped them out, and by the middle of the 20th century some thought the animals were extinct. But then, in 1957, a small herd was found in a remote part of Alberta by the crew of a plane flying overhead. Since then, their numbers have rebounded to around 11,000 in Canada, as governmental organizations have helped breed and repatriate them to a few parts of their former range.

PS: some of you have noticed my lens was at 180. Yes, pretty near them. Was a lucky shot driving the AlCan, a herd was gathered along the highway. I just pulled over, dropped the window, said hi and click. Little risk.
However, they sadly hang near this high speed highway and some are killed each year from driver's not paying attention.

The wood bison differs from the plains bison, the other surviving North American subspecies/ecotype, in a number of important ways. Most notably, the wood bison is heavier, with large males weighing over 900 kilograms (2,000 lb), making it the largest terrestrial animal in North America. The highest point of the wood bison is well ahead of its front legs, while the plains bison's highest point is directly above the front legs. Wood bison also have larger horn cores, a darker and woollier pelage, and less hair on their forelegs and beard." Wikipedia

May they thrive and prosper.

Have a great weekend!