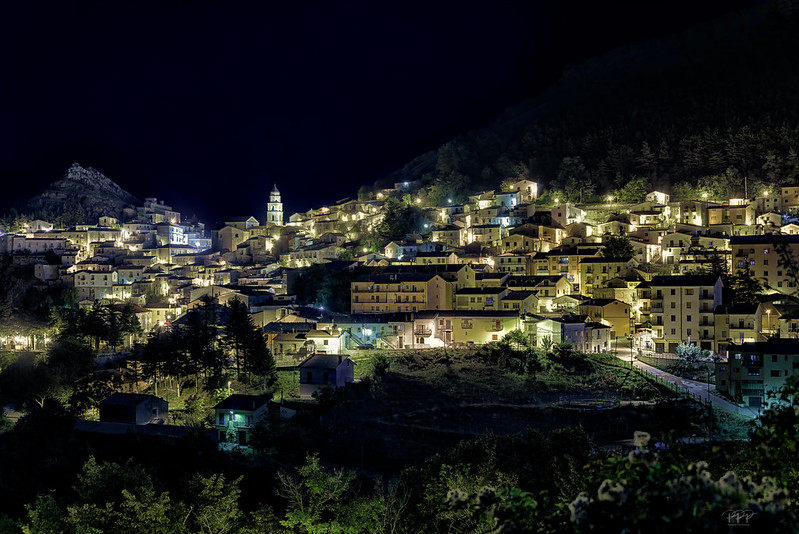 I always love Italian towns and cities at night or early morning well before sunrise it is one my favorite things to shoot, the people have withdrawn for the night and everything is blanketed in an ethereal soft glow giving the mundane a different character, pictured here is sleeping San Fele. San Fele is not overly touristed yet and typically only see’s Italian nature lovers frequenting the town and as such finding accommodations should be done through B&B sites the towns population has been dwindling since 1850 and only 3800 currently live in the municipality.

After fall of the Roman empire North and Central Italy was overrun by Normans, Saxons and Lombard’s with only the South in the hands of the Byzantine’s the Empire in the East, to keep the southern ambitions in check Otto the Holy Roman Emperor of the day began construction of a fortress here in 969AD. The fortress besides blocking the Byzantine advance protected the southern trade route through the Appenine Mountains called the Crocelle Pass and was the West/East pilgrim & crusader trail between Salerno and Bari. San Fele really became a boom town when the inhabitants of the city of Vitalba (of which the fertile valley where the town ply’s its agriculture trade is now named) suffered a large malaria outbreak prompting them to abandon their town to find higher and drier ground to live on.

Living in a volcanic area does not make for the most stable of geological situations, the town has been plagued by not just earthquakes but land slides and even underground flooding of the homes over the centuries with the most recent calamity a major earthquake in the 1980’s. The landslides may have been brough on by the towns people themselves through the deforestation of the area, the region was once covered by thick forests of maple, oak ,beech and mountain pines, a national park now protects all that is left of the ancient forest a small corner of the commune.

Disclaimer: My style is a study of romantic realism as well as a work in progress