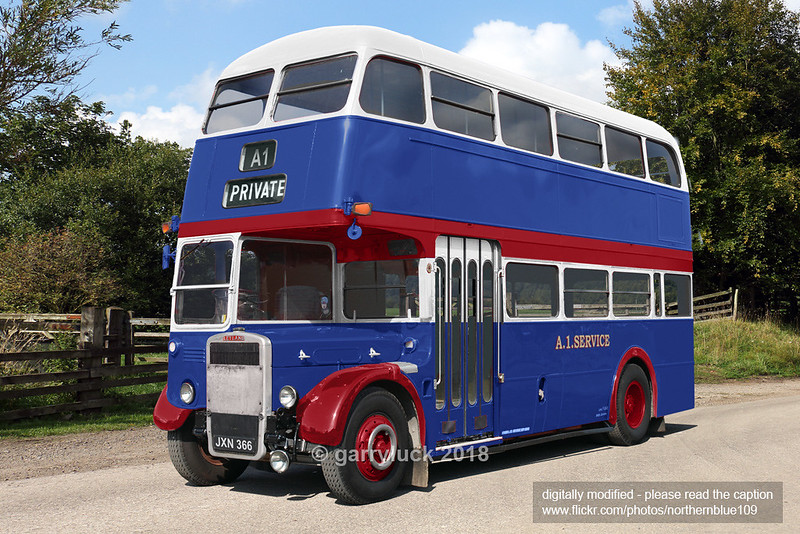 There could not have been much incentive to convert an elderly double-decker to forward-entrance layout in an era where one-person operation of double-deckers in public service was not permitted, although there could have been some benefit for contract work where single-manning was both possible and desirable. A1 Service member Docherty of Irvine seemingly thought so when he acquired JXN 366 in March 1958. New as London Transport RTL 43 in January 1949 and always a central area 'red' bus, it had a standard 56-seat rear-entrance body. Docherty's conversion was both neat and functional, increasing the seating capacity by one. Note the short windows immediately in front of the rear bay and incorporated within the existing body framing - a cheaper option would have been to retain the original solid panels. It passed to another A1 service member in 1963 and was sold later that year for further service elsewhere, first entering preservation in 1975 - but subsequently spending some time as a non-PSV before re-entering preservation. It was last reported on Ian's Bus Stop as 'preserved, in store in blue and white livery 2008' (19-Feb-18).

All rights reserved. Not to be posted on Facebook or anywhere else without my prior written permission. Please follow the link below for additional information about my Flickr images:
<a href="http://www.flickr.com/photos/northernblue109/6046035749/in/set-