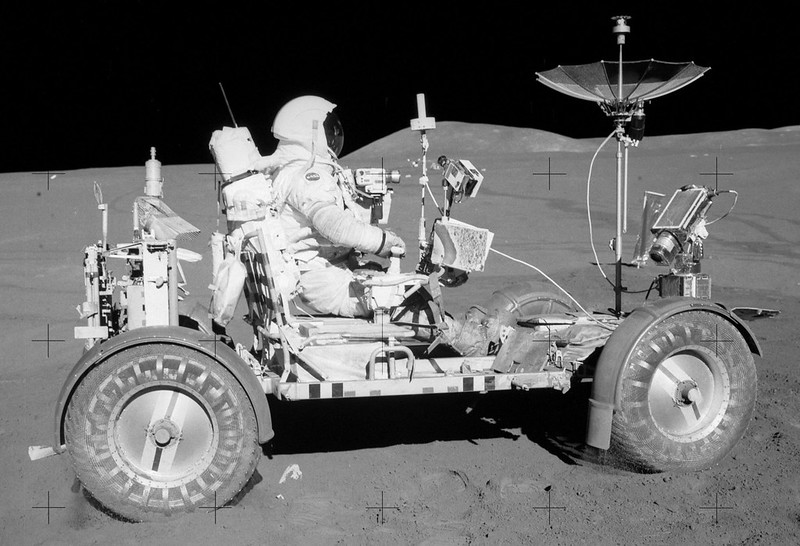 Today in 1971, Apollo 15 astronauts David Scott and James Irwin became the first humans to drive a car on the lunar surface, the Lunar Roving Vehicle. The lightweight, electric car greatly increased the range of mobility and productivity on the scientific traverses for astronauts. The LRV weighed 462 pounds (77 pounds on the Moon) and could carry two suited astronauts, their gear and cameras, and several hundred pounds of bagged lunar samples. The LRV was designed and developed by NASA's Marshall Space Flight Center and built by Boeing. Here, David Scott waits in the LRV for the return trip to the Lunar Module, Falcon, with rocks and soil collected near the Hadley-Apennine landing site. Today, Marshall is playing a vital role in the Artemis program by developing the Space Launch System, the backbone of NASA's exploration plans and the only rocket capable of sending humans to the Moon and Mars. The NASA History Program is responsible for generating, disseminating, and preserving NASA's remarkable history and providing a comprehensive understanding of the institutional, cultural, social, political, economic, technological, and scientific aspects of NASA's activities in aeronautics and space. For more pictures like this one and to connect to NASA's history, visit the Marshall History Program's webpage.