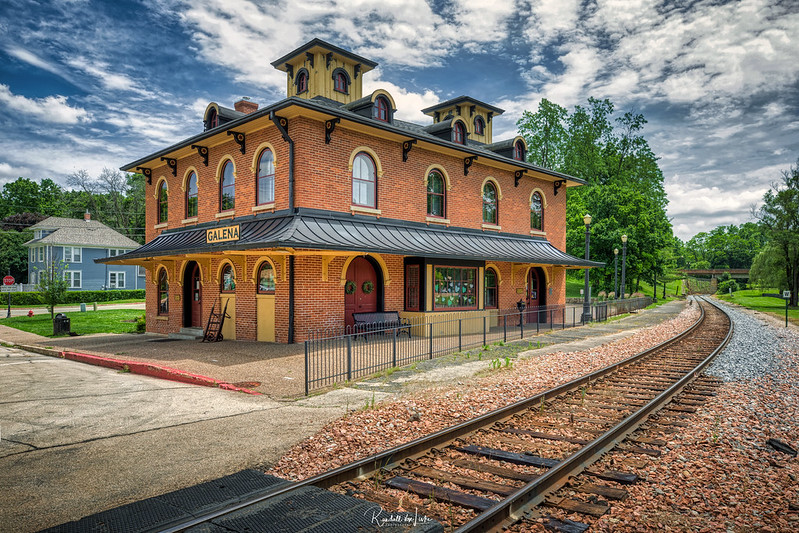 A view of the Illinois Central Railroad Depot in Galena, Illinois. The Italianate depot was constructed in 1857. This is purportedly the depot that U.S. Grant, who moved his family to Galena in 1860 before the start of the Civil War, boarded on his way to Washington, D.C. after his election as the 18th President of the United States in 1868. In recent years it has been used as an office for the Chamber of Commerce and a visitors center. The building is currently closed.

The depot is a contributing structure to the Galena Historic District which encompasses 85 percent of the City of Galena and includes more than 800 properties. The district was added to the National Register of Historic Places in 1969, with modifications in 2013.

Galena is the seat of Jo Daviess County in the northwest corner of Illinois. This is the unglaciated area of northwestern Illinois. The rolling hills, history and abundant 19th century architecture draws visitors from throughout the country. The estimated population of Galena in 2019 was 3,158.

If you've ever seen the movie "The Field of Dreams," you've already had a glimpse of Galena as it was one of the shooting locations for the film. It is here where the city night scenes were shot as Ray, played by Kevin Costner, meets "Doc" Graham, played by Burt Lancaster, and tries to convince him to come with him to Iowa.