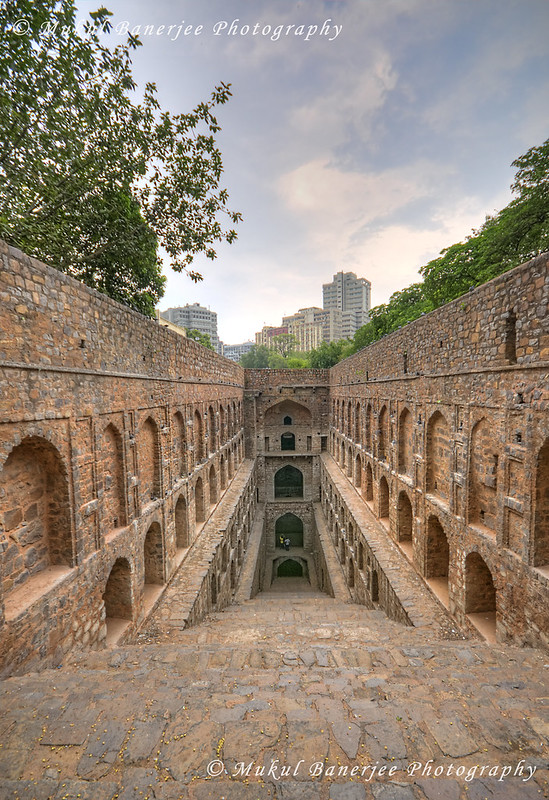 Agrasen ki Baoli (also known as Agar Sain ki Baoli or Ugrasen ki Baoli), designated a protected monument by the Archeological Survey of India (ASI) under the Ancient Monuments and Archeological Sites and Remains Act of 1958, is a 60-meter long and 15-meter wide historical step well on Hailey Road near Connaught Place, a short walk from Jantar Mantar in New Delhi, India. Although there are no known historical records to prove who built Agrasen ki Baoli, it is believed that it was originally built by the legendary king Agrasen[2] during the Mahabharat epic era and rebuilt in the 14th century by the Agrawal community which traces its origin to Maharaja Agrasen.

Baoli or bawdi, also referred to as baori or bauri, is a Hindi word (from Sanskrit wapi or vapi, vapika). In Rajasthan and Gujarat the words for step well include baoli, bavadi, vav, vavdi and vavadi. Water temples and temple step wells were built in ancient India and the earliest forms of step well and reservoir were also built in India in places like Dholavira as far back as the Indus Valley Civilisation.

It is among a few of its kind in Delhi. Some parts of the well, with 103 steps, are permanently immersed in water. The visible parts of this historical step well consist of three levels. Each level is lined with arched niches on both sides. From an architectural perspective this step well was probably rebuilt during the Tughlaq period. However, the oldest existing Baoli in Delhi, the Anangtal Baoli located in Mehrauli which was also known as Yoginipura, was built in the 10th century by the Rajput King Anang Pal II of Tomar Dynasty. Anang Tal literally means reservoir provided by Anang Pal of the House of Tomar.

Regarding the name Agrasen Ki Baoli it should be stated that in 1132 AD an Agrawal poet named Vibudh Shridhar mentions, in his work Pasanahacariu, a wealthy and influential Agrawal merchant of Dhilli named Nattal Sahu who was also a minister in the court of King Anang Pal III. Rebuilding the old Agrasen Ki Baoli would have been within the means of a well established and wealthy Agrawal community during the 14th century.