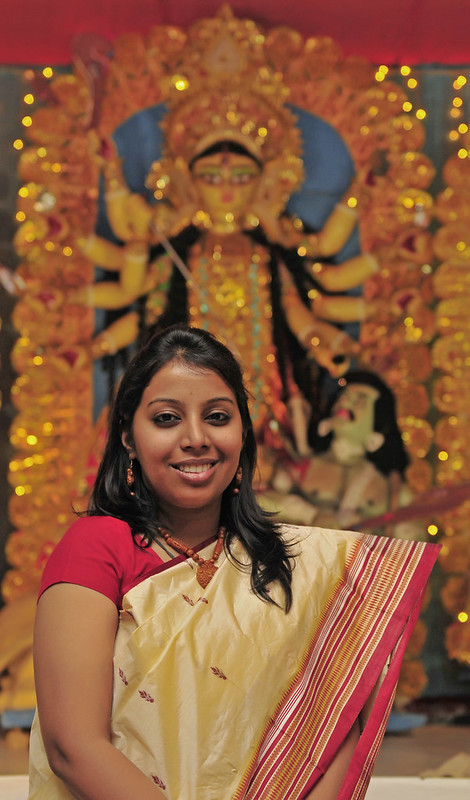 Durga puja (pronounced [ˈd̪uɾga ˈpudʒa], Bengali: দুর্গা পূজা ,Oriya: ଦୁର୍ଗା ପୂଜା ,‘Worship of Durga’), also referred to as Durgotsava (Bengali: দুর্গোৎসব, ‘Festival of Durga’), is an annual Hindu festival in South Asia that celebrates worship of the Hindu goddess Durga. It refers to all the six days observed as Mahalaya, Shashthi , Maha Saptami, Maha Ashtami, Maha Navami and Bijoya Dashami. The dates of Durga Puja celebrations are set according to the traditional Hindu calendar and the fortnight corresponding to the festival is called Devi Paksha (Bengali:দেবী পক্ষ , ‘Fortnight of the Goddess’). Devi Paksha is preceded by Mahalaya (Bengali: মহালয়া), the last day of the previous fortnight Pitri Pokkho (Bengali: পিতৃ পক্ষ, ‘Fortnight of the Forefathers’), and is ended on Kojagori Lokkhi Puja (Bengali: কোজাগরী লক্ষ্মী পূজা, ‘Worship of Goddess Lakshmi on Kojagori Full Moon Night’).

Durga Puja also includes the worship of Shiva, Lakshmi, Ganesha, Saraswati and Kartikeya. Modern traditions have come to include the display of decorated pandals and artistically depicted idols (murti) of Durga, exchange of Bijoya Greetings and publication of Puja Annuals.