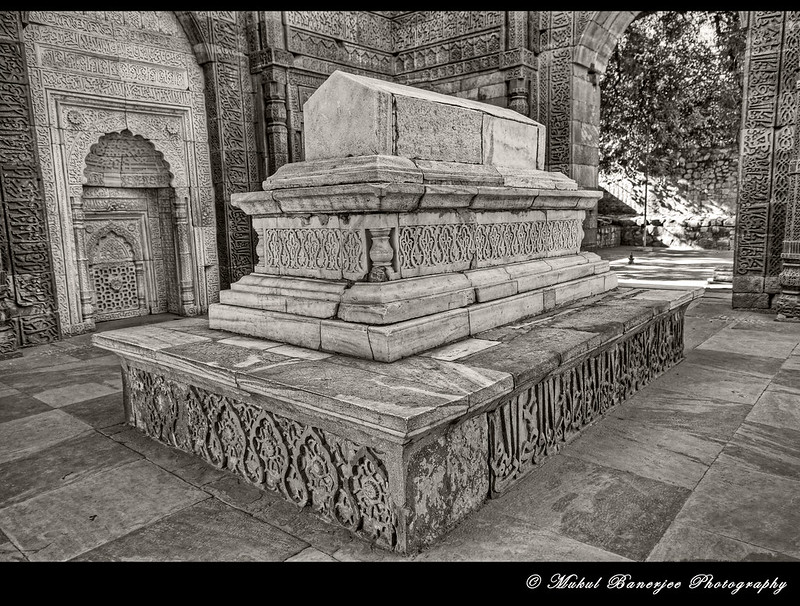 The Qutb Minar also spelled Qutab or Qutub, is an array of monuments and buildings at Mehrauli in Delhi, India. The construction of Qutb Minar was intended as a Victory Tower, to celebrate the victory of Mohammed Ghori over Rajput king, Prithviraj Chauhan, in 1192 AD, by his then viceroy, Qutb-ud-din Aibak, who later became the first Sultan of Delhi of Mamluk dynasty. After the death of the commissioner, the Minar was added upon by his successor Iltutmish (aka Altamash) and much later by Firoz Shah Tughlaq, a Tughlaq dynasty, Sultan of Delhi in 1368 AD.
The complex was added to by many subsequent rulers, including Firoz Shah Tughlaq and Ala ud din Khilji as well as the British. Some constructions in the complex are the Qutb Minar, the Quwwat ul-Islam Mosque, the Alai Gate, the Alai Minar, the Iron pillar, and the tombs of Iltutmish, Alauddin Khilji and Imam Zamin; surrounded by Jain temple ruins. In all, Islamic fanatic ruler Qutb-ud-din Aibak destroyed 27 Hindu and jain temples and reused the building materials for construction of Quwwat-ul-Islam mosque and the Qutub Minar according to a Persian inscription still on the inner eastern gateway

Today, the adjoining area spread over with a host of old monuments, including Balban's tomb, has been developed by Archeological Survey of India (ASI) as the Mehrauli Archeological Park, and INTACH has restored some 40 monuments in the Park. It is also the venue of the annual 'Qutub Festival', held in November–December, where artists, musicians and dancers perform over three days. Qutb Minar complex, with 3.9 million visitors, was India's most visited monument in 2006, ahead of the Taj Mahal, which drew about 2.5 million visitors.