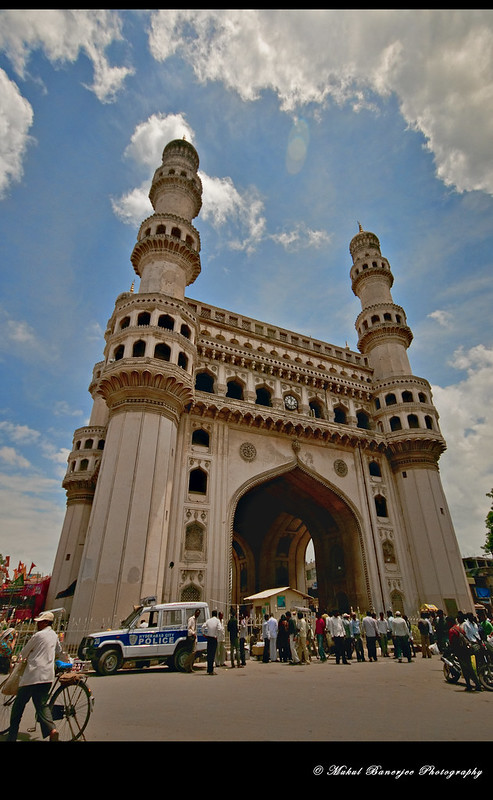 Charminar (Telugu: చార్మినార్, Urdu: چارمینار), built in 1591 AD, is a landmark monument located in Hyderabad, Andhra Pradesh, India. The English name is a transliteration and combination of the Urdu words Chār and Minar, translating to "Four Towers"; the eponymous towers are ornate minarets attached and supported by four grand arches. The landmark has become a global icon of Hyderabad, listed among the most recognized structures of India. The Charminar is on the east bank of Musi river. To the northeast lies the Laad Bazaar and in the west end lies the granite-made richly ornamented Makkah Masjid.

Sultan Muhammad Quli Qutb Shah, the fifth ruler of the Qutb Shahi dynasty built Charminar in 1591 AD,shortly after he had shifted his capital from Golkonda to what is now known as Hyderabad. He built this famous structure to commemorate the elimination of a plague epidemic from this city. He is said to have prayed for the end of a plague that was ravaging his city and vowed to build a masjid (Islamic mosque) at the very place where he was praying. In 1591 while laying the foundation of Charminar, Quli Qutb Shah prayed: "Oh Allah, bestow unto this city peace and prosperity. Let millions of men of all castes, creeds and religions make it their abode, like fish in the water.

The mosque became popularly known as Charminar because of the two Urdu words char, meaning four, and minar, meaning tower, combined to form Charminar.It is said that, during the Mughal Governorship between Qutb Shahi and Asaf Jahi rule, the south western minaret "fell to pieces" after being struck by lightning and "was forthwith repaired" at a cost of Rs 60,000. In 1824, the monument was replastered at a cost of Rs 100,000.

The structure is made of granite, limestone, mortar and pulverised marble. Initially the monument with its four arches was so proportionately planned that when the fort was opened one could catch a glimpse of the bustling Hyderabad city as these Charminar arches were facing the most active royal ancestral streets. There is also a legend of an underground tunnel connecting the Golkonda to Charminar, possibly intended as an escape route for the Qutb Shahi rulers in case of a siege, though the location of the tunnel is unknown.

The Charminar is a square edifice with each side 20 meters (approximately 66 feet) long, with four grand arches each facing a cardinal point that open into four streets. At each corner stands an exquisitely shaped minaret, 56 meters (approximately 184 feet) high with a double balcony. Each minaret is crowned by a bulbous dome with dainty petal like designs at the base.

A beautiful mosque is located at the western end of the open roof and the remaining part of the roof served as a court during the Qutb Shahi times.
There are 149 winding steps to reach the upper floor. Once atop, the solitude and serenity of the beautiful interior is refreshing. The space in the upper floor between the minarets was meant for Friday prayers. There are forty-five prayer spaces.

Charminar has the signature style of Islamic architecture. This great tribute to aesthetics looks sturdy and solid from a distance and, as one moves closer, it emerges as an elegant and romantic edifice proclaiming its architectural eminence in all its detail and dignity. Charminar looks equally spectacular at night when it is illuminated. Apart from being the core of the city’s cultural milieu, it has become a brand name.

Charminar is a beautiful and impressive square monument. Each of the corners has a tall, pointed minaret. These four gracefully carved minarets soar to 48.7 m above the ground, commanding the landscape for miles around. Each minaret has four stories, marked by a delicately carved ring. Unlike the Taj Mahal, Charminar's four fluted minarets are built into the main structure. The top floor, the highest point one can reach, provides a panoramic view of the city.
The actual mosque occupies the top floor of the four-storey structure. Madame Blavatsky reports that each of the floors was meant for a separate branch of learning before the structure was transformed by the Imperial British administration into a warehouse for opium and liqueurs.

A vault that appears from inside like a dome, supports two galleries within the Charminar, one over another, and above those a terrace that serves as a roof, bordered with a stone balcony. The main gallery has 45 covered prayer spaces with a large open space in front to accommodate more people for Friday prayers.
The monument overlooks another beautiful and grand mosque called Makkah Masjid. The area surrounding Charminar is known by same name. A thriving market still lies around the Charminar, attracting people and merchandise of every description.