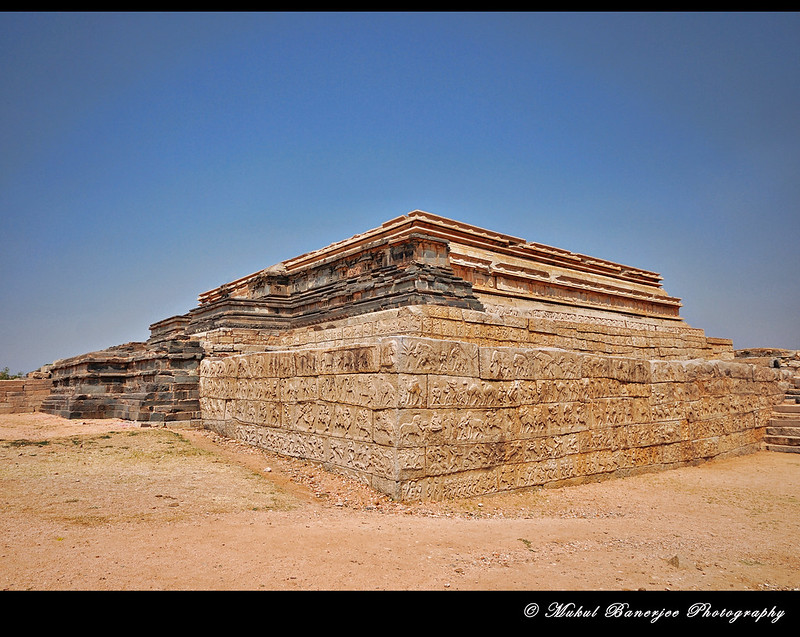 This is the tallest structure in this area and hence the first thing you would notice as you enter the Royal Enclosure. From a distance this looks like an ordinary elevated square stage. As you go close, the details emerge. The whole structure is made as a giant square structure in three layers.

There are mainly two stairways to reach the top. The front one (east facing) is highly decorated on either sides with carvings of elephants, horses and a host of other things. On the top there is nothing special to see except the great views on the campus around it. At the back of the platform a twin staircase is located. Probably this was used as a service staircase during the ceremonies. Generally one climb up through the front stair & get down through the rear, though there are no restrictions.

The sides of this three layered platform is basically fluted design with chains of sculptures (largely of elephants one behind the other). The most celebrated of the carvings are of the panels at the sidewall in the bottom portion. These dexterously carved sculptures and ornamentations depict any thing from the royal ceremony to the city life to the erstwhile foreign envoys to the kingdom to the hunting scenes to the…… Also any things from the Portuguese to Arabic to Chinese connections are visible. Probably this was made as a photo gallery for the benefit of the foreign envoys who had been visiting the capital. They could get the picture of the pompous celebrations held annually at the capital through theses depictions.

King Krishnadevaraya constructed this in commemoration on the victory over Udaygiri (now in Orissa). Archeologists believe that this platform had undergone systematic enhancements by successive kings came into power. The greenish schist stone additions in the front portions stands out from the rest and vouch this theory.

The king used this platform to watch the army march-pasts, war games, aquatic sports, shows of the royal animals, musical performances and also the most important Navarathri celebrations, the nine day-nine night state festival. And this was the annual occasion the governors of various provinces under the king visited the capital to pledge their loyalty to the king’s dominion. For the king it was an event to demonstrate the imperial pomp and power at his disposal.

A possible close replication and continuation of this you can still witness during the Dussera season at the Mysore palace, the later day capital of the state.

HAMPI
----------
The city of Hampi bears exceptional testimony to the vanished civilization of the kingdom of Vijayanagar, which reached its apogee under the reign of Krishna Deva Raya (1509-30). It offers an outstanding example of a type of structure that illustrates a significant historical situation: that of the kingdoms of South India which, menaced by the Muslims, were occasionally allied with the Portuguese of Goa.
The austere, grandiose site of Hampi was the last capital of the last great Hindu Kingdom of Vijayanagar. Its fabulously rich princes built Dravidian temples and palaces which won the admiration of travellers between the 14th and 16th centuries. Conquered by the Deccan Muslim confederacy in 1565, the city was pillaged over a period of six months before being abandoned.
As the final capital of the last of the great kingdom of South India, that of the Vijayanagar, Hampi, enriched by the cotton and the spice trade was one of the most beautiful cities of the medieval world. Its palaces and Dravidian temples were much admired by travellers, be they Arab (Abdul Razaak), Portuguese (Domingo Paes) or Italian (Nicolò dei Conti).
Conquered by the Muslims after the battle of Talikota in 1565, it was plundered over six months and then abandoned. Imposing monumental vestiges, partially disengaged and reclaimed, make of Hampi today one of the most striking ruins of the world.
The temples of Ramachandra (1513) and Hazara Rama (1520), with their sophisticated structure, where each supporting element is scanned by bundles of pilasters or colonnettes which project from the richly sculpted walls, may be counted among the most extraordinary constructions of India. In one of the interior courtyards of the temple of Vitthala, a small monument of a chariot which two elephants, sculpted in the round, struggle to drag along is one of the unusual creations, the favourite of tourists today as well as travellers of the past.
Besides the temples, the impressive complex of civil, princely or public buildings (elephant stables, Queen's Bath, Lotus Mahal, bazaars, markets) are enclosed in the massive fortifications which, however, were unable to repulse the assault of the five sultans of Deccan in 1565.