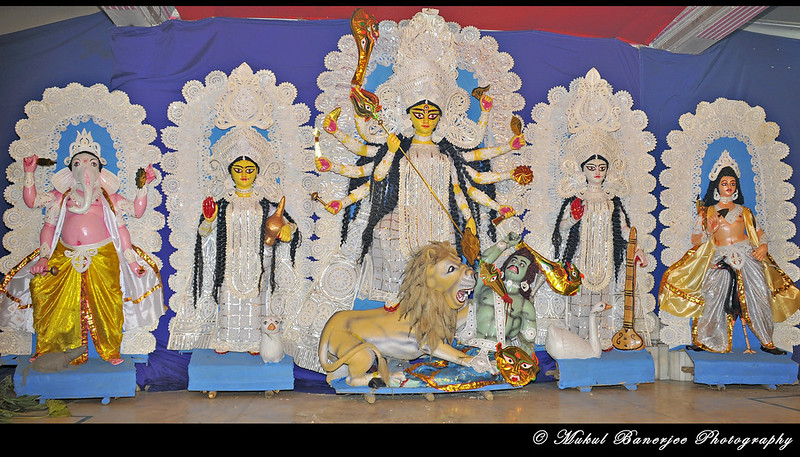 In Hinduism, Durga (Sanskrit: दुर्गा, meaning "the inaccessible" or "the invincible"; Bengali: দুর্গা, durga) or Maa Durga (Bengali: মা দুর্গা, ma durga, meaning "Mother Durga") "one who can redeem in situations of utmost distress" is a form of Devi, the supremely radiant goddess, depicted as having ten arms, riding a lion or a tiger, carrying weapons and a lotus flower, maintaining a meditative smile, and practicing mudras, or symbolic hand gestures.

An embodiment of creative feminine force (Shakti), Durga exists in a state of svātantrya (independence from the universe and anything/anybody else, i.e., self-sufficiency) and fierce compassion. Kali is considered by Hindus to be an aspect of Durga. Durga is also the mother of Ganesha and Kartikeya. She is thus considered the fiercer, demon-fighting form of Shiva's wife, goddess Parvati. Durga manifests fearlessness and patience, and never loses her sense of humor, even during spiritual battles of epic proportion.

The word Shakti means divine feminine energy/force/power, and Durga is the warrior aspect of the Divine Mother. Other incarnations include Annapurna and Karuɳamayi (karuɳa = kindness). Durga's darker aspect Kali is represented as the consort of the god Shiva, on whose body she is often seen standing.
Durga Slays Mahishasura, Mahabalipuram sculpture.

As a goddess, Durga's feminine power contains the energies of the gods. Each of her weapons was given to her by various gods: Rudra's trident, Vishnu's discus, Indra's thunderbolt, Brahma's kamandalu, Kuber's Ratnahar, etc.

According to a narrative in the Devi Mahatmya story of the Markandeya Purana text, Durga was created as a warrior goddess to fight an asura (an inhuman force/demon) named Mahishasura. He had unleashed a reign of terror on earth, heaven and the nether worlds, and he could not be defeated by any man or god, anywhere. The gods went to Brahma, who had given Mahishasura the power not to be defeated by a man. Brahma could do nothing. They made Brahma their leader and went to Vaikuntha — the place where Vishnu lay on Ananta Naag. They found both Vishnu and Shiva, and Brahma eloquently related the reign of terror Mahishasur had unleashed on the three worlds. Hearing this Vishnu, Shiva and all of the gods became very angry and beams of fierce light emerged from their bodies. The blinding sea of light met at the Ashram of a priest named Katyan. The goddess Durga took the name Katyaayani from the priest and emerged from the sea of light. She introduced herself in the language of the Rig-Veda, saying she was the form of the supreme Brahman who had created all the gods. Now she had come to fight the demon to save the gods. They did not create her; it was her lila that she emerged from their combined energy. The gods were blessed with her compassion.

It is said that upon initially encountering Durga, Mahishasura underestimated her, thinking: "How can a woman kill me, Mahishasur — the one who has defeated the trinity of gods?" However, Durga roared with laughter, which caused an earthquake which made Mahishasur aware of her powers.

And the terrible Mahishasur rampaged against her, changing forms many times. First he was a buffalo demon, and she defeated him with her sword. Then he changed forms and became an elephant that tied up the goddess's lion and began to pull it towards him. The goddess cut off his trunk with her sword. The demon Mahishasur continued his terrorizing, taking the form of a lion, and then the form of a man, but both of them were gracefully slain by Durga.

Then Mahishasur began attacking once more, starting to take the form of a buffalo again. The patient goddess became very angry, and as she sipped divine wine from a cup she smiled and proclaimed to Mahishasur in a colorful tone — "Roar with delight while you still can, O illiterate demon, because when I will kill you after drinking this, the gods themselves will roar with delight".[cite this quote] When Mahashaur had half emerged into his buffalo form, he was paralyzed by the extreme light emitting from the goddess's body. The goddess then resounded with laughter before cutting Mahishasur's head down with her sword.

Thus Durga slew Mahishasur, thus is the power of the fierce compassion of Durga. Hence, Mata Durga is also known as Mahishasurmardhini — the slayer of Mahishasur. According to one legend, the goddess Durga created an army to fight against the forces of the demon-king Mahishasur, who was terrorizing Heaven and Earth. After ten days of fighting, Durga and her army defeated Mahishasur and killed him. As a reward for their service, Durga bestowed upon her army the knowledge of jewelry-making. Ever since, the Sonara community has been involved in the jewelry profession [3].

The goddess as Mahisasuramardhini appears quite early in Indian art. The Archaeological Museum in Matura has several statues on display including a 6-armed Kushana period Mahisasuramardhini that depicts her pressing down the buffalo with her lower hands [4]. A Nagar plaque from the first century BC - first century AD depicts a 4-armed Mahisamardhini accompanied by a lion. But it is in the Gupta period that we see the finest representations of Mahisasuramardhini (2-, 4-, 6-, and at Udayagiri, 12-armed). The spear and trident are her most common weapons. a Mamallapuram relief shows the goddess with 8 arms riding her lion subduing a bufalo-faced demon (as contrasted with a buffalo demon); a variation also seen at Ellora. In later sculptures (post-seventh Century), sculptures show the goddess having decapitated the buffalo demon

Durga puja (pronounced [ˈd̪uɾga ˈpudʒa], Bengali: দুর্গা পূজা ,Oriya: ଦୁର୍ଗା ପୂଜା ,‘Worship of Durga’), also referred to as Durgotsava (Bengali: দুর্গোৎসব, ‘Festival of Durga’), is an annual Hindu festival in South Asia that celebrates worship of the Hindu goddess Durga. It refers to all the six days observed as Mahalaya, Shashthi , Maha Saptami, Maha Ashtami, Maha Navami and Bijoya Dashami. The dates of Durga Puja celebrations are set according to the traditional Hindu calendar and the fortnight corresponding to the festival is called Devi Paksha (Bengali:দেবী পক্ষ , ‘Fortnight of the Goddess’). Devi Paksha is preceded by Mahalaya (Bengali: মহালয়া), the last day of the previous fortnight Pitri Pokkho (Bengali: পিতৃ পক্ষ, ‘Fortnight of the Forefathers’), and is ended on Kojagori Lokkhi Puja (Bengali: কোজাগরী লক্ষ্মী পূজা, ‘Worship of Goddess Lakshmi on Kojagori Full Moon Night’).

Durga Puja also includes the worship of Shiva, Lakshmi, Ganesha, Saraswati and Kartikeya. Modern traditions have come to include the display of decorated pandals and artistically depicted idols (murti) of Durga, exchange of Bijoya Greetings and publication of Puja Annuals.