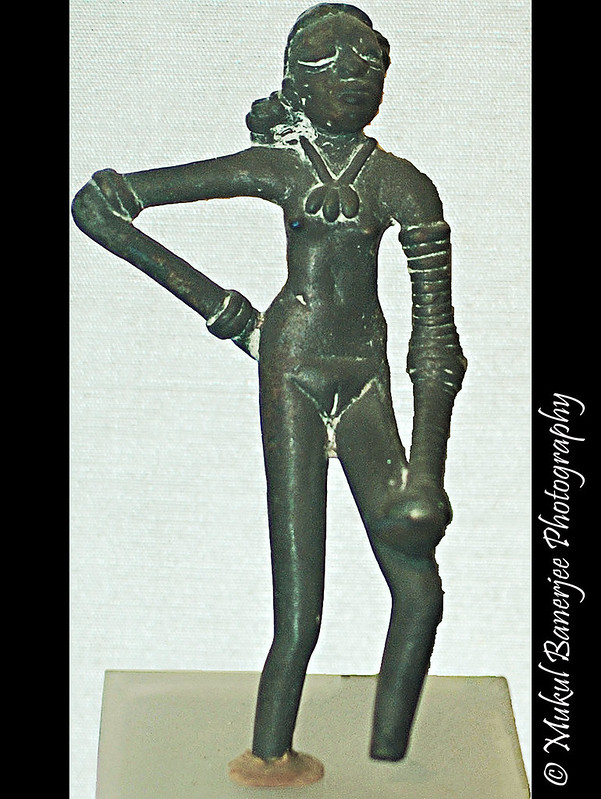 The "Dancing girl" found in Mohenjo-daro is an artifact that echoes the architectural wonders of ancient, deep buried long ago. Some 4500 years old, this 10.8 cm long bronze statue of the dancing girl was found in 1926 from a broken down house on the "ninth lane" in Mohenjo-daro. The figurine of the dancing girl of Mohenjodaro has changed the way one looked at Indian art of antiquity. The "pert liveliness" of the minute figure is unparallel and amidst its curves and pose whispers the secret of the ancient age. The bronze statuette is hardly four inches high yet speaks ample of the superb craftsmanship and of the caster`s skills.

The little dancing girl is as if a surmise echoing across the ages, a culture both distant and not so far, depicting a moment away from the present day, in one pretty tangible instant. The vivacity of the figurine since ages has drawn attention of the scholars. The dancing girl of Mohenjodaro is without any clothes; while her left leg is slightly bent , it is her arm that delicately rests on her thigh. Her entire weight is there on her right leg and the right arm is resting on her hips in an elegantly insouciant gesture. Her elaborately coiled hair, her bangles and necklaces speaks of the social life of the then India. A moment captured eternally, a vivid impression of the young the dancing girl of Mohenjodaro so ideally "beats time to the music with her legs and feet..."


The creativity of this lovely dancing girl of Mohenjodaro crosses time and space whilst murmuring the secrets of an apparently enigmatic, but at least fleetingly recognizable past of India.