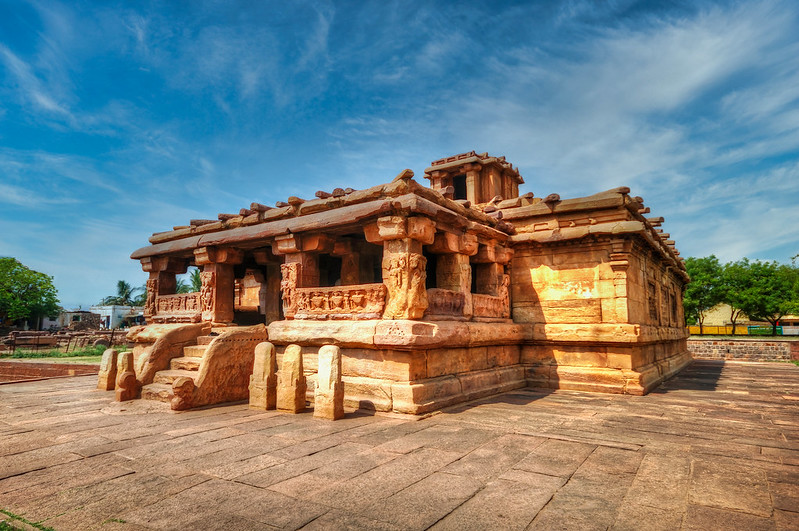 Lad Khan temple: Consists of a shrine with two mantapas in front of it. The shrine bears a Shiva lingam. The mukha mantapa in front of the sanctum has a set of 12 carved pillars. The sabhamantapa in front of the mukha mantapa has pillars arranged in such a manner as to form two concentric squares. There are also stone grids on the wall carrying floral designs. The temple is built in a Panchayat hall style, indicating a very early experiment in temple construction. The windows are filled with lattice style which is a north Indian style. The temple was built in late 7th or early 8th century.

Aihole is situated at a height of around 590 mt. and about 480 km from Bangalore.It was the first capital of the early Chalukyas.It is situated on the banks of the river Malaprabha and has over a hundred temples scattered around the village.It is located in bagalkot district of Karnataka. The sculptures of Ailhole temples have superb architecture.Famous as the "Cradle of Indian Architecture.The oldest temple here is, perhaps, the Lad Khan temple dating back to the 5th Century. On the roof of the temple is another shrine-like Vimana.

History
Chalukays first capital was Aihole.The first phase of the temple was built in 6th century CE and the second phase went on upto 12 th century CE .Here they built over 125 temples in various styles .The famous Chalukya King Pulakeshi II was follower of Jainism.Aihole inscription dated 634 CE, in Sanskrit language and old Kannada script.The prominent temple groups here are the Kontigudi group and the Galaganatha group of temples, although historians have divided all the temples into 22 groups.The cave temple of Ravana Phadi stands all by itself backed against the rocky hill out of which it has been carved.The Kontigudi group is a set of three temples consisting of the Lad Khan temple, Huchiappayyagudi temple and the Huchiappayya math.

The Galaganatha group has nearly 30 temples scattered on the bank of the river Malaprabha. Galaganatha temples are characterized by a curvilinear shikhara above the Garba Griha and images of the deities of Ganga and Yamuna at the entrance to the shrine.

This period saw the construction of great architectural wonders not only at Aihole but the whole region including Badami, Pattadakal, and other places.In the 17th century, Aurangzeb annexed the Deccan and made it a part of the Mughal Empire and Aihole, as a part of that region, came under the Mughal rule.The early Chalukya dynasty was ousted by its own district officers, the Rashtrakutas in AD 757. Later on, Aihole became a part of the Bahmani and other local Muslim dynasties.