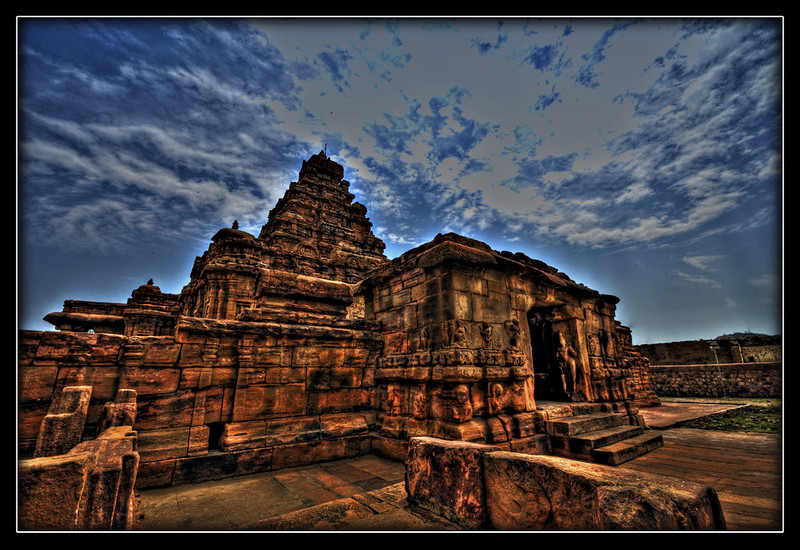 Pattadakal is a town in the Indian state of Karnataka The town lies on the banks of the Malaprabha River in Bagalkot district of North Karnataka region. It is 22 km from Badami and about 10 km from Aihole. The group of 8th century CE monuments in Pattadakal are the culmination of the earliest experiments in the vesara style of Hindu temple architecture. They were designated a World Heritage Site in 1987. The town displays both Dravidian (Southern) and the Nagara (Northern, Indo-Aryan) styles of temple architecture.

Pattadakal, the capital of the Chalukya dynasty of Southern India, who built the temples in the seventh and eighth centuries. There are ten temples including a Jain sanctuary surrounded by numerous small shrines and plinths. Four temples were built in Dravidian style, four in Nagara style of Northern India and the Papanatha temple in mixed style.

Group of monuments in Pattadakal

The group of monuments in Pattadakal was designated a World Heritage Site in 1987.

Virupaksha temple at PattadakalThe best known is the Virupaksha temple, built by Queen Lokamahadevi (Trilokyamahadevi)in 745 to commemorate her husband's victory (Vikramaditya II) over the Pallavas of Kanchi. The temple closely resembles the Kailashnatha temple in Kanchi which served as a model for this temple. The Virupakhsa temple in turn served as an inspiration for the Kailashnatha (Kailash Temple) temple built by the Rashtrakuta (During 757 -783 A.D. by Krishna I) dynasty in Ellora. The Virupaksha temple is rich in sculptures like those of lingodbhava, Nataraja, Ravananugraha and Ugranarasimha. Virupaksha is the earliest dated temple with the sukanasika, being closely followed by the Mallikarjuna temple.

Sangameshvara temple 725 CE PattadakalSangameshwara Temple (was called Vijayewara) is oldest temple in Pattadakal, built by Chalukya King Vijayaditya Satyashraya ( 696-733 AD), it has no sukanasika. The temple is in Dravidian style and it consists of a Sanctum, Inner passage and a Hall. On the outer wall there is Ugranarasimha, Nataraja sculptures. Both the Sangamesvara temple and the Virupaksha temple are similar to each other in being square on plan from the base to sikhara. The main vimana is of three storeys. The lowermost storey is surrounded by two walls. The second storey being an upward projection of the inner wall. While the outer wall encloses the covered circumambulatory round the sanctum.

Mallikarjuna Temple is a smaller version of the Virupaksha temple and was built by Vikramadiyta's second queen Trilokyamahadevi in 745. This temple is also was constructed by Rani Trilokyamahadevi to celebrate the victory (by Vikramaditya II) over the Pallavas. The Mallikarjuna temple was built immediately after and close to the Virupaksha temple (It has a similar plan), with a 4 storeyed vimana with a circular griva and sikhara. Mallikarjuna temple in Dravidian style.

Kasivisvesvara temple was the last to be built in early Chalukya style. This temple was built by the Rashtrakutas in the 8th century. Kashi Vishwanatha temple in Nagara style

Kadasiddhesvara and Jambulingeswara temples both attributed to 7th century A.D. Kadasiddeshvara temple which has a sculpture of Shiva holding a Trident or Trishul in his hands and its twin temple, the Jambulinga Temple are all built in Nagara style and resemble the Hucchimalli' Guddi at Aihole.

Galaganatha temple was built a century later in the architecture style of Rekha Nagara Prasada. Temple contains a sculpture of Lord Shiva killing the demon Andhakasura.

Jain Temple located on the Pattadakal-Badami Road, is built in the Dravidian style by the Rashtrakutas of Manyakheta. It has some very beautiful sculptures & probably dates from the 9th century and was built by either King Amoghavarsha I or his son Krishna II.


Papanatha temple is built in the vesara style dated to 680. The temple was started in nagara style but later changed to a more balanced Dravidian style. Sculptures here speak of scenes from Ramayana and Mahabharatha. This temple has many similarities with the Navabrahma temples in Alampur, Andhra Pradesh, which were also built by Badami Chalukyas.

Museum of the Plains and Sculpture gallery is maintained by the Archeological Survey of India on the Bhutanatha temple road.
Other important monuments here are the monolithic stone pillar bearing inscriptions, Naganatha temple, Chandrashekara temple and inscriptions in the Mahakuteshwara temple.