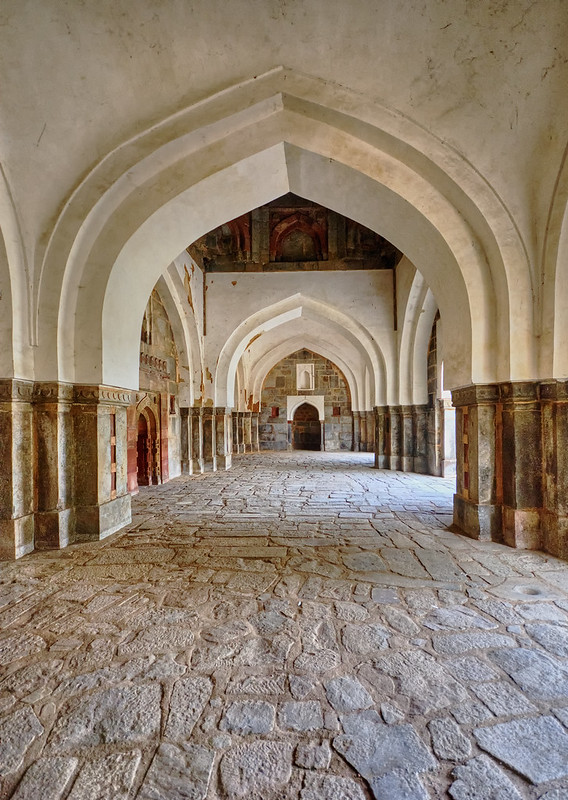 There are various views regarding internment of the body of Humayun. It is generally agreed that his body was initially buried in the Purana Qila, later moved to a temporary burial tomb in Sirhind, due to the invasion of Hemu in 1556. His body was again brought back to Delhi and buried in the Sher Mandal when Akbar defeated Hemu, and ultimately to the present location when the mausoleum was built by his begum and widow, Haji Begum in 1569. The mausoleum was built at an estimated cost of rupees fifteen lakhs. The Humayun’s tomb marks the beginning of the major building activities of the Mughals.


The building style is a combination of Persian architecture and indigenous building styles. The right combination of the red sandstone building medium with the white marble, the latter used as large inlays, exhibits the maturity of this style. This kind of combination of red sandstone and white marble in the tombs could be invariably seen in the architecture of Delhi Sultanates of 14th century A.D. The earliest example, of course, is the Alai Darwaza which has exquisite white marble decorations over red sandstone background. The Mughals readopted this style of decorative architecture and in a sense revived this technique of construction. The other buildings which used this style of decoration include that of mosque of Jamali Kamali (ca. 1528-29), the Qala-i-Kuhna mosque (ca. 1534) and the tomb of Ataga Khan (ca. 1556-67).


The Humayun tomb is located at the centre of a huge garden complex. The garden complex is divided mainly into four compartments further being sub-divided into many square parts (a typical example of Mughal char-bagh), with causeways and water channels, and water pavilions at regular intervals. The tomb complex is enclosed by a high rubble wall; entered through two entrance gateways, one on the west and other on the south, the latter being closed now. The south gate rises to a height of nearly 15.5 metres and consists of a central octagonal hall flanked rectangular rooms. The first floor of the gateway has square and oblong rooms. On the outside, the gate is flanked by screen-walls with arched recesses. Immediately to the west of the south gateway is an enclosure measuring 146 metres by 32 metres, built against the exterior face of the enclosure wall. The building is a low-roofed one with 25 arched entrances and was meant to house the attendants of the royal tomb. Another building is also located nearby, which along with the above enclosure is a later addition. At present, the western gate is used by the visitors to enter the tomb complex. The west gate is smaller in comparison to the south gate and rises to a height of 7 metres and is also double-storeyed.


The northern, southern and western walls of the boundary wall are built of rubble stone and its interior face consists of recessed arches. On the eastern side, the height of the enclosure wall is subdued and was originally meant as an access to the Yamuna river which was flowing nearby.


The building medium in the Humayun’s Tomb is of three kinds of stones, viz., red sandstone, while marble and quartzite. The enclosure walls and the two gateways are constructed of local quartzite with red sandstone dressing and marble inlay. The stairs of platform of the main tomb is also dressed with quartzite. The quartzite is locally available in the ridges of Delhi, while the red sandstone came from the mines of Tantpur near Agra and white marble from the famous Makrana mines of Rajasthan.


The ascending stairs at the centre of each of the four sides of the elevated platform leads to an open terrace, at the centre of which is located is the main tomb. The main tomb is located below the monument and is approached through a horizontal passage to the east of southern stair. The arched openings of the platform contain many miscellaneous tombs.


The main tomb is octagonal on plan and rises into two storeys, at the four diagonal corners of the octagon are four chambers, which also houses many tombs of the family members of Humayun. The octagonal tomb is surmounted by a double dome supported by squinches. The employment of double dome in a mausoleum is first seen here and this gives the builder the advantage of building an imposing structure of enormous height, tactfully concealing the presence of double domes on the outside. While the exterior height gives an imposing look, the low ceiling of the lower dome gives a proportionate height of the interior features. The pattern of constructing double domes was already prevalent in West Asia during this period which was first introduced in the Humayun’s tomb.


The dome of this mausoleum is also a complete one, in the sense that it makes a full circle when completed on the other side too. The outline of the dome represents a complete semi-circle and thus a distinct variation from the earlier varieties of the dome architecture. The main mausoleum, as mentioned above, rises in two storeys and could be viewed in three stages. The lower one consists of eight arched openings of the octagon, above which is a balconied arch openings, over which is the intrados of the inner dome, decorated with red sandstone grilles. The interior face of the main tomb is also relived with different kinds of stone and the white marble as the bordering inlay decorative patterns. The red sandstone jail decorations could be seen at the mid arched openings placed at its lower level.


The extrados of the mausoleum is veneered with white marble stones in contrast to the largely red sandstone building. The dome is bulbous in shape; the skyline is relieved with small pavilions on the four corners along side the main dome.