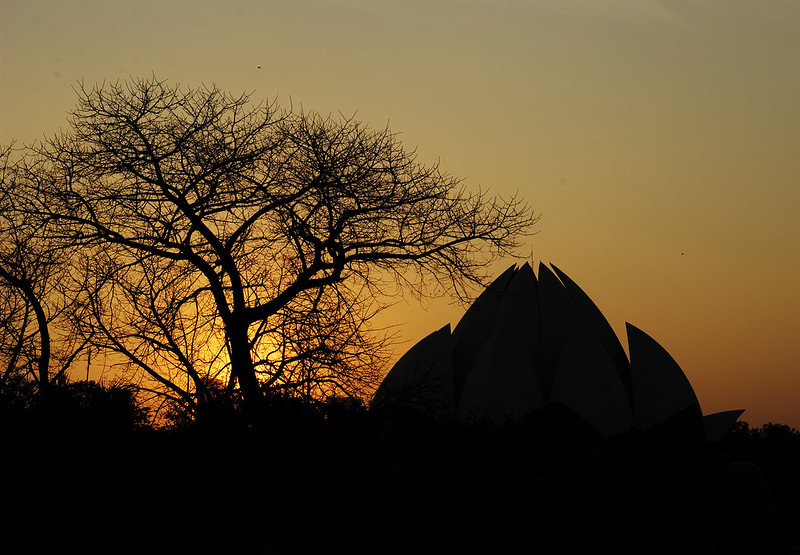 The Lotus Temple, located in New Delhi, India, is a Bahá'í House of Worship completed in 1986. Notable for its flowerlike shape, it serves as the Mother Temple of the Indian subcontinent and has become a prominent attraction in the city. The Lotus Temple has won numerous architectural awards and been featured in hundreds of newspaper and magazine articles.

All Bahá'í Houses of Worship, including the Lotus Temple, share certain architectural elements, some of which are specified by Bahá'í scripture. `Abdu'l-Bahá, the son of the founder of the religion, stipulated that an essential architectural character of a House of Worship is a nine-sided circular shape. While all current Bahá'í Houses of Worship have a dome, this is not regarded as an essential part of their architecture. Bahá'í scripture also states that no pictures, statues or images be displayed within the House of Worship and no pulpits or altars be incorporated as an architectural feature (readers may stand behind simple portable lecture stands).

Inspired by the lotus flower, the design for the House of Worship in New Delhi is composed of 27 free-standing marble-clad "petals" arranged in clusters of three to form nine sides. The nine doors of the Lotus Temple open onto a central hall slightly more than 40 metres tall that is capable of holding up to 2,500 people. The surface of the House of Worship is made of white marble from Penteli mountain in Greece, the very same from which many ancient monuments and other Bahá'í Houses of Worship are built. Along with its nine surrounding ponds and the gardens, the Lotus Temple property comprises 26 acres (105,000 m²; 10.5 ha).

The site is in the village of Bahapur, in the National Capital Territory of Delhi. The architect was an Iranian, who now lives in Canada, named Fariborz Sahba. He was approached in 1976 to design it and later oversaw its construction. The structural design was undertaken by the UK firm Flint and Neill. The major part of the funds needed to buy this land was donated by Ardishír Rustampúr of Hyderabad, Sindh, who gave his entire life savings for this purpose in 1953. The construction company was ECC Construction Group of Larsen & Toubro Limited. A portion of construction budget was saved and used to build a greenhouse to study indigenous plants and flowers that would be appropriate for use on the site.

Since its inauguration to public worship in December 1986, the Bahá'í House of Worship in Delhi has, as of late 2001, attracted more than 70 million visitors, making it one of the most visited buildings in the world. Its numbers of visitors during those years surpassed those of the Eiffel Tower and the Taj Mahal.