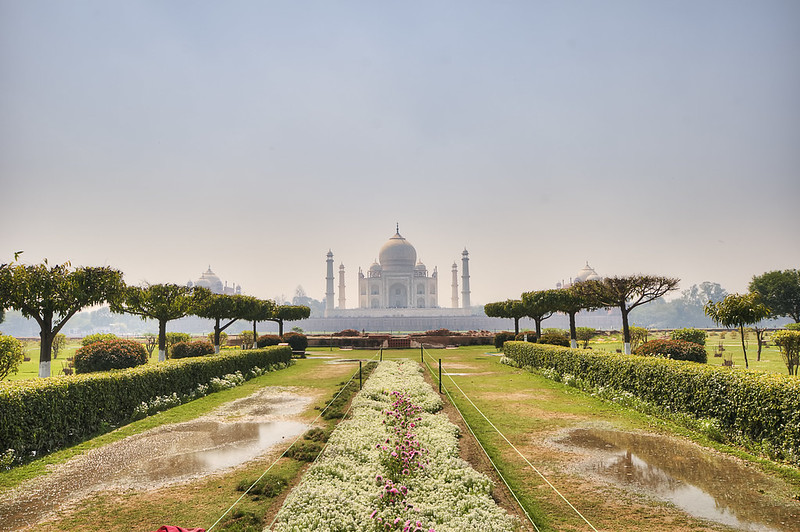 Mehtab Bagh (Hindi: मेहताब बाग़, Urdu: ماہتاب باغ‎, translation: Moonlight Garden) is a charbagh complex located in Agra, North India. It is situated north of the Taj Mahal complex and the Agra Fort on the opposite side of the Yamuna River, in the flood plains. The garden complex, square in shape, measures about 300 by 300 metres (980 ft × 980 ft) and is perfectly aligned with the Taj Mahal on the opposite bank. During the rainy season, the ground becomes partially flooded.

The Mehtab Bagh garden was the last of eleven Mughal-built gardens along the Yamuna opposite the Taj and the Agra Fort; the first being Ram Bagh. It is mentioned that this garden was built by Emperor Babur (d. 1530). It is also noted that Emperor Shah Jahan had identified a site from the crescent-shaped, grass covered floodplain across the Yamuna River as an ideal location for viewing the Taj. It was then created as "a moonlit pleasure garden called Mehtab Bagh." White plaster walkways, airy pavilions, pools and fountains were also created as part of the garden, with fruit trees and narcissus. The garden was designed as an integral part of the Taj complex in the riverfront terrace pattern. Its width was identical to that of the rest of the Taj. Legends attributed to the travelogue of the 17th century French traveler Jean Baptiste Tavernier) mention the wish of Shah Jahan to building a black marble mausoleum for himself, as a twin to the Taj; however, this could not be achieved as he was imprisoned by his son Aurangzeb. This myth had been further fueled in 1871 by a British archaeologist, A.C.L. Carlleyle, who, while discovering the remnants of an old pond at the site had mistaken it for the foundation of the fabled structure. Thus, Carlleyle became the first researcher to notice structural remains at the site, albeit blackened by moss and lichen. Mehtab Bagh was later owned by Raja Man Singh Kacchawa of Amber, who also owned the land around the Taj Mahal

Frequent floods and villagers extracting building materials nearly ruined the garden. Remaining structures within the garden were in a ruinous state. By the 1990s, the garden's existence was almost forgotten and had degraded to little more than a massive mound of sand, covered with wild vegetation and alluvial silts.